The Edge is first rock star to perform in Sistine Chapel 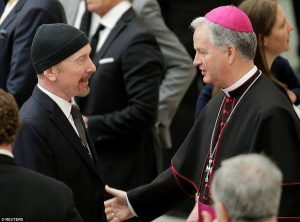 History was made on Saturday when The Edge, the lead guitarist from Irish rock band U2, played in the Sistine Chapel at the Vatican.

The first-ever rock concert in the historic chapel, was given for about 200 doctors researchers who had attended the conference at the Vatican on regenerative medicine.

Wearing his signature black beanie, The Edge played and sang Leonard Cohen’s ‘If it be your will’ and U2 songs ‘Yahweh’ ‘Ordinary love’ and ‘Walk on’, which he dedicated to Pope Francis as the people’s Pope. Originally the song was written for Burmese democracy leader Aung San Suu Kyi.

The Edge has personal experience of cancer. His father died from cancer just last month and his daughter has survived leukaemia.

He was accompanied by a choir of seven Irish teenagers.

The musician said he was a bit shocked when he was asked to perform at the Vatican.

“When they asked me if I wanted to become the first contemporary artist to play in the Sistine Chapel, I didn’t know what to say because usually there’s this other guy who sings,” he said, referring to U2’s lead singer Bono.

He thanked Pope Francis and Vatican officials for allowing him to play in “the most beautiful parish hall in the world.”

“Being Irish you learn very early that if you want to be asked to come back it’s very important to thank the local parish priest for the loan of the hall,” he said.

Watch a short video of the performance here: https://www.youtube.com/watch?v=XQ-1zJ9cnxQ