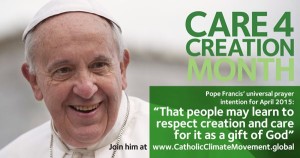 Pope Francis made a strong appeal to humankind on Earth Day not to exploit the planet and to safeguard the environment.

Speaking at the end of the weekly General Audience in St Peter’s Square, the Pontiff said, “The relationship of mankind with nature must not be conducted with greed, manipulation and exploitation.”

Rather, he said, “it must conserve the divine harmony that exists between creatures and Creation within the logic of respect and care, so it can be put to the service of our brothers, also of future generations”.

On Earth Day, Pope Francis exhorted everyone to “see the world through the eyes of God the Creator: the earth is an environment to be safeguarded, a garden to be cultivated”.

Among those present at Wednesday’s General Audience was the Executive Secretary of the Comprehensive Nuclear Test-Ban Treaty Organisation, Dr Lassina Zerbo of Burkina Faso.

“Having this General Audience to engage Pope Francis and his ministry in [the push for] banning nuclear test explosions is indeed a privilege,” Dr Zerbo told Vatican Radio following the audience.

The Comprehensive Nuclear-Test-Ban Treaty (CTBT) bans nuclear explosions by everyone, everywhere – on the Earth’s surface, in the atmosphere, underwater and underground.

Negotiated in Geneva between 1994 and 1996, the CTBT has 183 signatory countries, of which more than 160 have also ratified it, including three of the declared nuclear states: France, Russia, and the UK.

Before the CTBT can enter into force, however, 44 specific nuclear technology holder countries must sign and ratify.

Of these, eight are still missing: China, Egypt, India, Iran, Israel, North Korea, Pakistan and the US.

Dr Zerbo told Vatican Radio that religious believers have a role to play in making the treaty’s goals a reality, and that Pope Francis is setting an example for religious leaders.

“I was touched by Pope Francis thanking me for the work we do to ban nuclear testing, and asking me to pray for him,” Zerbo said.

“It’s a solid message,” he continued. “We need different religious groups to be able to reach out to their followers and get them to understand some of the main issues of this world today, and Pope Francis is doing this, and we expect others to do it.”

Separately on Wednesday, the Director of the Holy See’s Press Office, Fr Federico Lombardi confirmed that Pope Francis will visit Cuba ahead of his visit to the US in September.

In a statement on Wednesday afternoon, Fr Lombardi said he was able to confirm that the Pope, having received and accepted the invitation from the civil authorities and bishops of Cuba, had decided to pay a visit to the island before his arrival in the US for the trip announced some time ago.

The visit to Cuba is especially significant in light of the role played by Pope Francis in diplomatic negotiations between the US and Cuba.

Leaders from both nations have publicly thanked Pope Francis for his aid in negotiations.

Pope Francis will be the third Pope to visit Cuba.

Pope Francis’ visit to Cuba will precede his journey to Philadelphia in the United States for the World Meeting of Families. During his Apostolic Voyage, the Holy Father will also visit Washington, D.C. and New York City.