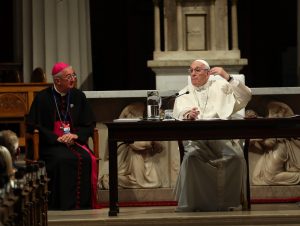 All parishes in the Dublin diocese should be focused on the “renewal of the Church” in the coming years, according to Archbishop Diarmuid Martin.

The Archbishop announced his proposal yesterday in St Mary’s Pro-Cathedral, in a homily reflecting on Pope Francis’s visit to Ireland.

Before the Papal visit, the Archbishop had said that he hoped that Pope Francis would “challenge the Church in Ireland to be more authentically the Church of Jesus Christ in a culture that is different”.

Yesterday Archbishop Martin said that Pope Francis could not provide all the answers himself. The future of the Church in Ireland was the responsibility of Ireland’s Church community, he said, even though it remained firmly attached to the Church of Rome.

“There is one Church, the Church of Jesus Christ, built on apostolic succession and the unity of the bishops with and under the Bishop of Rome. We belong to a single yet diverse faith community, united through pondering the Word of God and the teaching of the Apostles, through prayer and the Sacraments and through the life of charity.”

Taking inspiration from Sunday’s Gospel reading (Mark 7:1-8, 14-15, 21-23, which relates to an exchange between Our Lord and the Pharisees about rules of religious practice),  Archbishop Martin said Jesus is not criticising rules and norms and traditions as part of religion and belief. “He is saying that there is need for discernment to ensure that what we practise and what we teach is really coming from God, and is not just a complex set of human rules that have been given a religious aura but are not the essence of what religion is about.

“We can see here one challenge facing the Church in Ireland in the years to come, that of discerning where the essentials of the Christian life lie and how our institutions, in their daily life, witness to what is essential.”

The Archbishop said there were some who believe that a Christian life is about protecting ourselves from a complex world by going back to safe and familiar norms and traditions of the past. On the other hand, there are those who have thrown away the superficial norms of the past, and in doing so have thrown away many dimensions of what the Church must be.

The logic of Jesus challenges each of these temptations, said Dr Martin. “Jesus teaches us that we must discern what is right and just and true and loving, and that this is not just an external ritual. Nor is it just the fruit of our own feeling of goodness, much less the fruits of a public opinion survey.

“The Christian message is not just a message of comfort or conformity. Every generation has thought in various ways that progress would permit or even demand that believers throw aside faith, judged to be no longer relevant to the thought patterns of the day.

“Human progress, however, has shown itself to be ambiguous, and human reason can indeed deceive itself under pressure from strong cultural undercurrents that seem to be attractive, but can be dangerously deceptive. True faith in Jesus Christ allows us rather to be purified through the liberating truth of the Gospel.”

The Archbishop said he would like every parish in the Dublin diocese to find concrete ways of reflecting on this challenge. And he suggested that this activity be organised around the Feast of Dublin’s patron saint, St Laurence O’Toole, on Wednesday 14 November.

“Each parish and parish community can find its own path of reflection, with the help of the parish pastoral council. The aim is not to provide instant answers but at least to begin to set out a realistic agenda for renewal of the Church in the years to come,” he said.