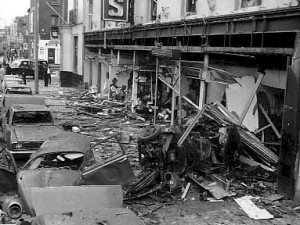 Talbot Street after the bombing – one of four no warning bomb attacks in Dublin and Monaghan.

The Dublin and Monaghan bombings did immense harm to the victims, their families and Irish society, Archbishop Diarmuid Martin said at a Mass in Dublin on Saturday to mark the 40th anniversary of the atrocities.

In his homily at St Mary’s Pro Cathedral, the Archbishop told those gathered to honour the 34 people killed and 300 injured, “If there is anything that the horrendous events of the Dublin and Monaghan bombings teach us, it is that hope and the future will never be the fruit of senseless violence.”

He added, “And yet there are still those in our society who fail to grasp that.”

Commenting that the bomb attacks had done immense harm to the individual victims, Archbishop Martin said it had done great harm to the nation at a difficult time “when the hope of peace was so needed.”

He warned that hope cannot be constructed on pointless violence.

“These bombings tore up what is most sacred, the human bodies of our brothers and sisters. How can we mend that harm?” he said.

He asked, “How can we calculate how many lives have been shattered and hearts have been broken by the loss of each victim? How many families, how many spouses and children and friends?”

The Primate of Ireland said the damage and destruction done by the bombings could never be undone and that we must learn to “vigorously reject whatever tears up human dignity and loving human interaction.”

As a lasting tribute to who died in Dublin and Monaghan, he said we could commit to be at the forefront of those who build up a culture which rejects violence in its many forms; in families, on our streets, against women, against children, and that pointless violence of revenge which only opens another circle of violence.

“In these forty years we have made great progress on the path towards reconciliation and healing among the people of Ireland, North and South. We thank God for that progress,” Archbishop Martin said on Saturday.

He added, “Today we recognise that there is only one road towards peace and that is through reconciliation and coming together in mutual respect and understanding.” But he warned that reconciliation will only be lasting when it is based on truth.

“There is a growing awareness in our modern societies of the importance of accessibility of the truth.  Jesus stressed that the truth will make us free but we often overlook the fact that this applies to pleasant truths and unpleasant truths alike.

The Archbishop added, “Democracy needs accountability. Accountability requires a culture where the truth can be discovered. Investigative journalists and whistle blowers may be a thorn in the side of some: but democracy owes them a debt.”

He also commented that in a modern human rights culture, which fights against impunity and seeks reconciliation in truth, it is anachronistic that there are still those who place obstacles to the revelation of the truth of what happened in these bombings forty ago.

“We seek to know the truth not out of a sense of revenge,” Archbishop Martin said.

Separately, the Taoiseach Enda Kenny has urged the British Prime Minister and the Secretary of State for Northern Ireland to grant members of the Justice for the Forgotten group access to documents on the Dublin-Monaghan bombings.

Justice for the Forgotten announced last Wednesday that it is going to sue the British government in a bid to secure access to files which they believe will confirm collusion in the bombings.

The Tánaiste, Eamon Gilmore, has called for information to be released. The Ulster Volunteer Force was blamed in the immediate aftermath of the attacks.