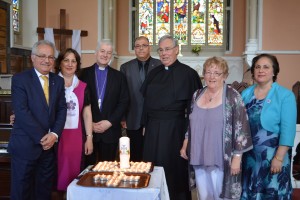 “I respect and admire the Armenian people and I stand today in prayerful solidarity with you in this centenary year of commemoration of the Armenian Genocide,” the Anglican Primate of Ireland Archbishop Michael Jackson said on Sunday.

The Archbishop made his comment in an address at a service of remembrance in Dublin organised by the Armenian Apostolic Church in Ireland to mark the beginning of the genocide perpetrated by the Ottoman authorities between 1915 and 1923.

“We are still faced with the question of the relationship between recognition and response in regard to these events,” he said.

“We hope and pray that the world in its entirety will see the need for the addressing of unanswered questions and that the same world will also see the fact that there is still time for the recognition of the truth to be stated and shared.”

He outlined how his own respect and affection for the Armenian people derived from his first visit to Armenia in 2002, as a member of the Anglican Oriental Orthodox International Commission.

“We gathered in Holy Etchmiadzin and were granted an audience with the Catholikos during our time living in the monastery. Since those early days of meeting, I have had the opportunity to invite Archbishop Nathan, when he was bishop in London, to Ireland while I was bishop of Clogher and I have had the honour to visit on two occasions successive Patriarchs in the Patriarchate in Jerusalem. I also had the joy of being present at the dedication of the Armenian Cathedral in London and in taking part in that service.”

“I now have the even greater pleasure of having members of the Armenian community in Ireland worship here in Taney Parish in these United Dioceses of Dublin and Glendalough and of worshipping from time to time with you,” he said.

The Church of Ireland Primate was one of seven faith leaders who leading the prayer service including representatives of the Jewish faith, Greek Orthodox, Methodists, Salvation Army, Catholic and Quakers as well as civic and community representatives.

Members of the Armenian community in Ireland urged the Government to recognise the genocide and pressure the Turkish state to recognise the extermination of 1.5 million Armenians between 1915 and 1923 as genocide.

Archbishop Jackson said “the first thing is to name it as a genocide”.

Speaking to CatholicIreland.net, the Archbishop said, “I realise that governments and embassies have to make their own decisions around what they can do. Where I come from is knowing Armenians for 15 years; listening to their story and hearing their evidence as human beings.”

He said that in the centenary year, a number of nations have recognised this was “a killing of a nation and therefore that is where I think we get the word genocide”. 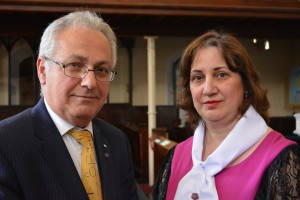 Dr Paul Manook of the Armenian community, who lost his grandfather and all of his aunts bar one, said that having the Government acknowledge the genocide and speak to Turkey about it would have “a huge impact”.

“It could even impact on the US and the UK because of Ireland’s close ties to them and because Ireland is a country which has suffered itself.”

According to Ayda Sarafian Lundon, who also lost a number of relatives, recognising the genocide is a matter of justice and important for humanity.

“If people had acknowledged it at the time perhaps the Holocaust would not have happened, or Rwanda or what is going on now with ISIS in northern Iraq,” she suggested.

Leonard Abrahamson, President of the Jewish Representative Council, reminded the gathering that just 25 years after the Armenian genocide mankind repeated the same horrors, massacres, death marches, rape and genocide in the Holocaust.

He cited Edmund Burke, who warned that for evil to flourish all it takes is for a good man to say nothing. 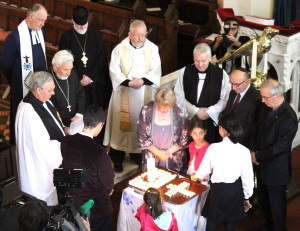 In his address at Christ Church in Dundrum, Bishop Ray Field said, “The Turkish government has long denied that the massacre amounted to genocide; they say the killings were a tragic consequence of war and not a planned annihilation.”

He said Pope Francis’ recent statement that the extermination of 1.5 million Armenians by the Ottoman authorities was an act of genocide was “a display of prophetic courage” in which the Pope had said the “unsayable”.

He added, “Some people in Turkey have called for recognition and reconciliation given the increasingly settled world opinion” on the matter.

The service in Christ Church Taney incorporated prayers in Armenian sung by the Armenian Church choir, poetry by Paruyr Sevak and an address by Canon Patrick Thomas of the Church of Wales who has written on this dark episode in Turkish history.

“A crime is something that is deliberately perpetrated” he said or the death of 1.5 million Armenians each of whom “had a name and was infinitely valuable in the sight of God”.

The weekend of commemoration began on Friday 24 April with a photographic exhibition in Christ Church, Dun Laoghaire and a silent vigil at Dun Laoghaire Pier which included the release of 100 Chinese lanterns representing 100 years of the unrecognised genocide.

Archbishop Jackson has given his support to the placing of an Armenian Khachkar or stone cross in the grounds of Christ Church cathedral in Dublin as a memorial for the centenary of the commencement of the Armenian genocide.