A Donegal curate on the island of Arranmore is saving souls in more ways than one, as he is also a member of the local lifeboat crew. 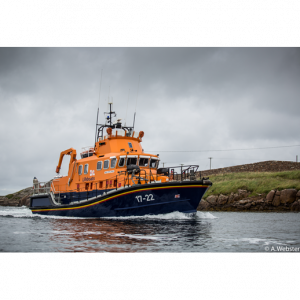 Fr Liam Boyle, who was ordained in September 2014, says he had no previous seafaring experience before joining the Arranmore lifeboat crew. His only previous experience of operating a boat was “on the pond in Dunlewey in a little tub.”

Now he is part of a crew of 21 volunteers responsible for rescuing seafarers in trouble anywhere along the northwest coast.

After serving six months as a curate in Ardara, Fr Liam moved last year to Arranmore Island, which has a population of 550 people.

A few months ago, curiosity took him down to the pier to inspect the local lifeboat, Myrtle Maud, an all-weather Severn-class vessel. He says that when he went over to have a look at the lifeboat, he almost fell down the steps of the pier! Nevertheless, despite his lack of sea legs, the crew members present invited him aboard to have a look around the craft.

“I joked about becoming a member and the lads said ‘why not?’” said Fr Liam. “I thought nothing more of it then, but as the months passed I thought a little more about it and decided to undertake the training. And now I am a full volunteer and ready to answer emergency calls.”

Fr Liam and the other crew members wear a pager so that they can be contacted when an emergency call is made and their assistance is required.

Some of these calls involve lifeboat men and women going to sea in treacherous conditions. In 2006, for example, the Myrtle Maud rescued a yachtsman 50 miles out to sea in swells of between 10 and 12 metres in height. On that rescue mission, the lifeboat was at sea for 22 hours.

While it is fairly unusual to have a clergyman as a lifeboat crew member, increasingly RNLI volunteers come from ‘non-traditional backgrounds’ – only about 10% are involved in maritime occupations.

When Fr Liam was being ordained, Bishop Philip Boyce of Raphoe told him in his homily: “Be the servant of all, especially of those most in need.” 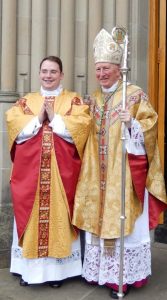 The bishop little imagined that the young curate would respond to that injunction by joining the RNLI, responding to SOS – ‘save our souls’ – messages and going to the aid of ‘those in peril on the sea’.

Of course, Fr Liam is not the first clergyman to be part of a lifeboat crew. Fr Tom Dalton, parish priest of Riverchapel in County Wexford, is a volunteer with Courtown RNLI.

In popular culture, the priest most associated with lifeboats is Fr Thomas Byles, who twice refused a place aboard a lifeboat after the RMS Titanic hit an iceberg. After all the lifeboats had been launched, he heard confessions and gave absolution to more than 100 passengers trapped on the stern of the stricken ship. Pope Piux X described him as ‘a martyr for the Church’.