Donations to Trócaire continue to rise 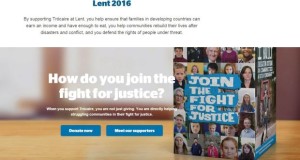 Donations to Catholic Church in Ireland’s overseas aid agency Trócaire have continued to rise according to the latest figures.

Donations rose by seven percent to €25 million in the year to April 2016. These figures included Trocaire’s annual Lenten campaign.

The bishops have acknowledged “with gratitude the generosity of the lay faithful, priests and religious for their support of the work of Trócaire”.

Last year’s Trócaire Lenten campaign raised almost € 8.3 million, which was about a 4 percent increase on the 2014 figure of €8 million.

The funds were used to help 2.4 million people in Africa, Latin America, Asia and the Middle East and included 45,000 families who got access to local resources, including land and water.

The agency also protected over 700 human rights defenders who were abused and attacked in Guatemala and approximately 6,000 women who survived abuse and were provided with healthcare, counselling and legal aid.

In its Lenten campaign this year, the agency’s biggest annual fundraising campaign in Ireland, the Trócaire box featured some of the charity’s supporters and their support for the fight for justice for the world’s poor.

Speaking about its Lenten Campaign to the Irish Times, Trócaire’s executive Director Eamonn Meehan said, “This year’s Trócaire box was a recognition of ordinary people who are doing extraordinary things in the pursuit of justice and a fairer world.”

“The people featured on the box are schoolchildren, teachers, grandparents, clergy, volunteers and families. All of them have something in common. They cannot ignore poverty and they want to make a difference in whatever way they can.”

Mr Meehan added, “It goes without saying that the work we do would not be possible without the support of the Irish public. Last year, Trócaire brought support and relief to 2.4 million people in some of the poorest areas of the world. We are incredibly grateful to all our supporters for their help.”