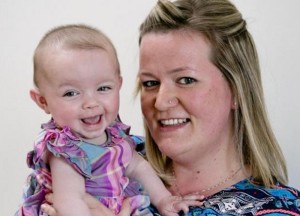 In England, doctors told a pregnant mother that her baby had died in the womb, but baby Eliza was subsequently born healthy.

Currently, she is 6 months old and is described as a bonny baby.

Last November when the 31-year-old mother Ellen Bellamy was eight months pregnant, two doctors announced that her child would be stillborn. The news left her “simply devastated.”

According to newspaper reports, the doctors had carried out scans to check the baby.   “When doctors told us our baby wasn’t moving and there was no heartbeat, Chris [her husband] and I were simply devastated,” said Ellen Bellamy.

Nursing staff asked the couple to call relatives to bring a shawl in which to wrap up the dead baby, and they began discussing funeral plans.  Mrs. Bellamy said “it was traumatic.”

At one point, Mr. Bellamy was afraid that his wife had also died when he saw a crash team rushing to attend to her in the hospital theatre.  In fact, the team was on standby.  His wife had given birth to baby Eliza, who weighed 5 lb 2oz. The  team had been called in as a precautionary measure, as medical staff thought the baby might have to be resuscitated.

Mr. Bellamy said: “I will never forget the feeling of sheer relief when I realised both Ellen and Eliza were fine.  I couldn’t believe it when the midwife showed me a little cot where Eliza lay kicking her legs.”

Mrs. Bellamy could not take the news in when she was told that her baby had been born alive.

Doctors blamed their misdiagnosis on “excess stomach weight”, but the hospita has since apologised to the Bellamys.

A spokesman for Heatherwood and Wexham Park Hospitals NHS Foundation Trust said: “We apologise unreservedly for the aspects of Mrs. Bellamy’s care that fell below our usual standards.  A serious incident was raised at the time and valuable lessons have been learned.”

Commenting on the story, Steven Ertelt of LifeNews said the episode highlights the importance of understanding that “doctors are not always right”.

Sometimes doctors “will tell a mother or prospective parents that their baby has some sort of severe physical or mental disability and suggest an abortion as a result,” he writes.  In such scenarios, parents have rejected abortion and “given birth to healthy babies or to disabled babies they have loved and were glad they had not aborted”.