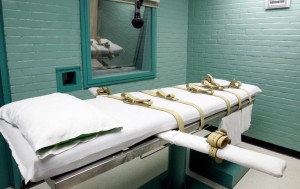 A recent opinion piece in the Journal of the American Medical Association (JAMA) has called into question doctors’ participation in executions in the U.S.

In the late 19th century a New York commission on capital punishment included the suggestion that lethal injection might prove more humane than hanging and when the practise became widespread in the late 20th century, doctors became involved in the process.

However following the botched execution of Oklahoma inmate Clayton Lockett, the U.S. based Death Penalty Committee of The Constitution Project recommended a series of measures.  Among these were that qualified medical personnel should be present and should be responsible for all medically related elements at executions.

Disputing this, three doctors Robert D. Truog MD, I. Glenn Cohen JD and Mark A. Rockoff MD argue in the JAMA that having medics participate in a capital punishment is an ethical dilemma that must be addressed by the medical profession itself.

If capital punishment is warranted, they argue, then it should be done without the involvement of medical professionals.

The doctors agree that “by playing on the imagery of a scene that is almost indistinguishable from the everyday practice of anesthesiologists when they ‘put a patient to sleep’, there is an attempt to cover the procedure with a patina of respectability and compassion that is associated with the practice of medicine.”

Commenting on the journal piece, which was published online on May 19, Wesley J. Smith of Life News said medical groups do not want doctors to facilitate the death penalty.  However some of these groups do accept euthanasia and assisted suicide.

Mr  Smith expressed his concern that the ‘procedure’ of putting death row inmates to sleep in executions might extend to the practice of euthanasia.

In Ireland both euthanasia and assisted suicide are illegal.  Under Irish law it is an offence to “aid, abet, counsel or procure the suicide of another person, or an attempt by another person to commit suicide.”  The maximum penalty for this offence under the Criminal Law (Suicide) Act 1993 is 14 years’ imprisonment.

However legal opinion in Ireland recognises the right of  a competent adult to decide on the nature of their medical treatment.

A competent individual has the “right to refuse medical treatment to facilitate a natural death, but this is not considered a right to die by artificial means nor through the actions of a third party,” according to the Irish Council for Bioethics.