Archbishop concerned over levels of violence

Archbishop Diarmuid Martin of Dublin has highlighted once again his concern over the level of violence being witnessed on the streets of the capital and elsewhere around the country.

In his homily at a Mass for thousands of faithful attending the annual Divine Mercy conference in Dublin’s RDS over the weekend, the Archbishop warned that “There is a sense in which a society which loses a sense of God’s mercy slips into a climate of negativity and violence, of harshness and vindictiveness.”

He further warned that when a society loses that sense common purpose and of wishing the good of the other, “then a self-centredness inevitably enters in, in which anything is lawful that enables me to dominate rather than serve others”.

The Archbishop underlined that Divine mercy is not an empty niceness. He said the call of Jesus is always a challenging call. “The God of mercy is not a God who is happy that we remain as we are.”

He concluded his homily by praying that the conference would open hearts and root out all selfishness which prevents people from allowing the mercy of God to flood their minds and hearts and souls and make them missionaries of his mercy in our world, “especially to all who are alienated and frustrated and troubled and caught up in their own self-centeredness”.

Referring to the scripture readings, he said we can only thank God that he does not think like the Pharisees and Scribes in the Gospel.

Jesus reaches out to us in his mercy, even though he knows exactly who we are and what our failings are and where we sin and where we fall back into sin again and again. He said there is a sense in which Jesus prefers to be with sinners than with the virtuous.

Asking how can that be, the Archbishop explained that the virtuous about whom Jesus is speaking are really the false virtuous, those who decide themselves that they are virtuous and “who think that if you follow some sort of rule-book and tick boxes about being good then you can consider yourself good”. 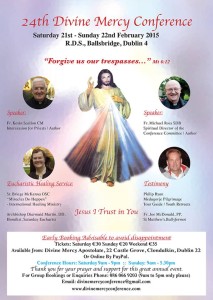 He warned that “the problem with a mentality like that is that you inevitably end-up not just thinking that you are good, but that you begin to think that you are better than others with a totally self-centred understanding of what being good is”.

Underlining that Jesus comes to call sinners to repentance, the Archbishop said he comes so that those who are sinners can recognise their sinfulness and reject any sense of personal superiority and can trust in the mercy of God which alone brings us healing, forgiveness and new life.

Following her final vows and after suffering for more than three years with rheumatoid arthritis, she was miraculously healed during the celebration of the Eucharist when she was 24. Some time later she received, in prayer, the gift of healing for which she has become so widely known.

Fr Kevin Scallon is a priest of the Vincentian Community. In his early years he ministered in both England and Nigeria. In 1976, Fr Kevin, while on the faculty of All Hallows College, started the ‘Intercession for Priests’ in Ireland. Since then he, along with Sr Briege McKenna, has been ministering to priests and lay people across the globe.