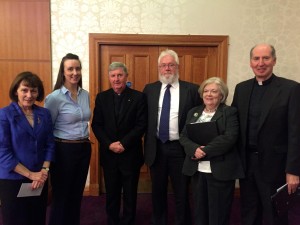 The Bishop of Ferns has said that because of his diocese’s past failings in relation to child protection it now has “a huge determination” not to find itself in that place again.

Addressing over 250 people at a conference on child safeguarding hosted by Bishop Michael Smith of Meath in Trim last Wednesday, Bishop Denis Brennan said there was now a policy of zero tolerance towards any manifestation of child abuse in Ferns.

Dr Brennan outlined some of the transformation that has taken place since the publication of the Ferns Report 10 years ago this month, which was three and a half years in preparation.

The investigation examined the way the diocese handled claims of child abuse and everyone involved was interviewed, while every file in the bishop’s house was read.

The Ferns Report criticised aspects of how the diocese handled some complaints of abuse.

Quoting from the Report, Bishop Brennan said, “with the benefit of hindsight it is possible to see that the Church authorities, the medical profession, and society generally, failed to appreciate the horrendous damage which the sexual abuse of children, can and does cause.’’

Bishop Brennan said that protocols are now in place to prevent a recurrence of the suffering and scandal of the past.

Ten years down the road, the Bishop said, Ferns is beginning to realise the unintended consequences of this focus on the mechanics of safeguarding.

In the light of past events, and putting a heavy emphasis on zero tolerance in Church work with children, an atmosphere of suspicion and fear around interaction with children grew, he said.

Pilgrimages became adult only affairs, altar servers became scarce, choirs no longer had many children and parish youth clubs were dwindling. Any suggestion of children-focused activities triggered the ‘what if’ fear factor, he explained.

One of the main consequences is the reluctance of adults, lay and clerical, to involve themselves with children and young people. “Some parishes no longer have altar servers. This is understandable but also regrettable,” he said.

While these protocols sometimes give rise to fear on the part of volunteers and clergy working with children today, he emphasised that the Church is now in a better place to engage again with young people “and to close the gap that has opened up in recent years between adults and children”.

He underlined that the real reason Church personnel are involved in safeguarding is not just to tick the safeguarding boxes.

“The real reason for all the protocols is to create a safe space where children can experience joy and fun in their young lives. The protocols are not an end in themselves – they are a means to an end – an essential means, but a means nonetheless.” 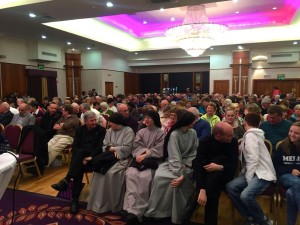 Bishop Brennan suggested that often what prevents people from seeing this is fear, “fear of responsibility; fear of being vulnerable; fear of not ticking all the boxes. This makes safeguarding burdensome and unattractive and it sometimes prevents us from getting involved at all”.

“If on the other hand we are safeguarding with the child’s joy as our focus and aim it begins to make sense, it helps us to understand the purpose of the forms and procedures and it also creates a positive energy around the activities that is often missing if we are safeguarding out of a context of fear,” he said.

Bishop Brennan explained that Ferns had set about establishing a youth group where safeguarding stopped being the focus of our ministry and became the vehicle that enabled us to engage with young people with confidence.

“It was decided to pilot a youth group reflecting our diocesan safeguarding policy for two years in Wexford parish. Its purpose would be to enhance the spiritual, physical, emotional and social development of our young people in their own parish community.”

Referring to the work of Dr Monica Applewhite who works with the United States Bishop’s Conference in the area of safeguarding, he said she likes to talk of what she calls “the wellness of the Church as a whole, and the children of our Church as the primary representatives of this community”.

“This is why safeguarding is so important, this is why it is so vital. And this is why we must always be open to incorporating new insights into our pastoral and professional practice of safeguarding, always understanding that it remains a work in progress, and crucially, a ministry for everyone,” he said.

The purpose of the conference in Trim was to outline how good child protection measures support the task of working with young people in parishes.

The conference was attended by TUSLA social workers who assist the Church in its work.

A series of short presentations were given by four teenagers.

Aideen Tansy-Moran (Delvin), Sean Savage (Drogheda), Alex McEvily and Ben Stuart (both from Mullingar) described their positive experiences of being part of their parishes. They thanked the priests and volunteers for making the Church a safe and caring place for young people.

Peter Kieran is a member of the National Board for Safeguarding Children in the Catholic Church in Ireland.

He complimented Bishop Michael Smith and the priests and volunteers who attended the Conference.

He emphasised that parents and children can have great confidence that their children are in a safe and caring place when they take part in Church activities because of the good standards and professionalism that is well established in the Diocese of Meath.

Aoife Walsh from the Diocese of Limerick re-enforced the point that good child protection helps priests and volunteers to overcome the fear that can be associated with youth ministry because of what happened in the past.

“I don’t have any problem recruiting leaders for the youth ministry programmes that we run. I have waiting lists in fact and no one has ever had a problem filling in an application form or completing their Garda vetting.”

“Now I should say that most of my youth leaders are in their early twenties so they have grown up with a different cultural context, they don’t know any different, they do what’s asked because that’s just the way it is. They have no fear around it,” she said.