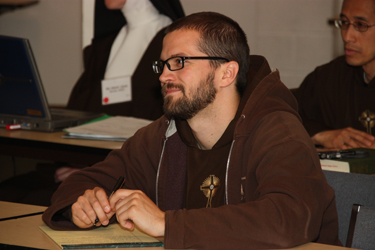 The Church is experiencing a “difficult and delicate” time in religious life, Cardinal Joao Braz de Aviz, prefect of the Congregation for Religious, has said.

Speaking at a press conference in Rome on 31 January, the Vatican official, along with Archbishop Jose Rodriguez Carballo, the secretary of the Congregation for Religious, outlined some of the Vatican’s plans for the special Year of Consecrated Life which Pope Francis announced last December for 2015.

The year will begin in October 2014 to coincide with the anniversary of the promulgation of the conciliar constitution Lumen Gentium and it is intended to help religious face the future with confidence.

Cardinal Braz de Aviz has encouraged members of religious orders to rediscover the original charisms of their communities.

The special year, which was announced by Pope Francis at a meeting with 120 superior generals of male religious orders, was in answer to suggestions made by many religious superiors, according to Cardinal Braz de Aviz.

The year marks the 50th anniversary of the publication of the Vatican II decree on religious life, Perfectae Caritatis.

During the year, the Vatican will host meetings for young religious and novices and for spiritual directors, as well as an international conference on religious life.

The year will conclude with another major ceremony at the Vatican, probably on 21 November 2015: the 50th anniversary of Perfectae Caritatis.

Archbishop Carballo expressed the hope that before the end of the Year of Consecrated Life, Pope Francis would publish a new apostolic constitution on the topic, updating Sponsa Christi, which was released by Pope Pius XII in 1950.

The first objective of the Year, according to Cardinal Braz de Aviz, is to mark the “50 years that separate us from the Council as a moment of grace for consecrated life, as marked by the presence of the Spirit that leads us to live even our weaknesses and infidelities as an experience of God’s mercy and love.”

The Prefect of the Congregation for Religious said the second objective was to embrace the future with hope.

“We are well aware that the present moment is ‘difficult and delicate’ … and that the crisis facing society and the Church herself fully touches upon the consecrated life.”

“But we want to take this crisis not as an antechamber of death but as … an opportunity to grow in depth, and thus in hope, motivated by the certainty that the consecrated life will never disappear from the Church because ‘it was desired by Jesus himself as an irremovable part of his Church’.”

He said the third objective was to evangelise vocations to consecrated life to bear witness to the beauty of the ‘sequela Christi’.

“The consecrated take up the witness that has been left them by their respective founders and foundresses … They want to ‘awaken the world’ with their prophetic witness, particularly with their presence at the existential margins of poverty and thought, as Pope Francis asked their superior generals,” the Cardinal said.

Archbishop Rodriguez Carballo explained that the Year’s official inauguration is planned with a solemn celebration in St Peter’s Basilica, possibly presided by the Holy Father, which could take place on 21 November, the World Day ‘Pro orantibus’.

This would be followed by a plenary assembly of the Congregation for Institutes of Consecrated Life and Societies of Apostolic Life, the theme of which would be ‘The ‘Novum’ in Consecrated Life beginning from Vatican II’.

Every four months throughout the year, a newsletter on themes related to consecrated life will be produced, the first of which will come out on 2 February 2015, entitled ‘Be Glad’ and dedicated to the Magisterium on consecrated life.

In response to the Pope’s wishes, the Antonianum Pontifical University in Rome will host a symposium on the management of economic goods and capital by religious from 8 to 9 March 2015.

There will be a series of initiatives planned particularly for contemplative religious, including a world Chain of Prayer among monasteries.

Archbishop Rodriguez Carballo also spoke of several documents that the dicastery is preparing, including the document Mutuae relationes on the relations between bishops and religious.

Also, on the mandate of Pope Francis, the instruction Verbi Sponsa, which deals with the autonomy and cloistering of entirely contemplative religious, is being revised.