Home > Featured > Diaconate: not a stop gap solution for shortage of priests

Diaconate: not a stop gap solution for shortage of priests 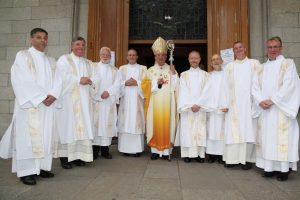 Seven married men and a widower were ordained as deacons for the diocese of Dublin at the Pro Cathedral yesterday.

In a moving ceremony, Archbishop Diarmuid Martin told the men that the diaconate was not a “stop-gap solution invented to address a fall in the number of priests”.

Prior to Vatican II in the Latin Church, the diaconate had been reduced to a final step on the road to the priesthood, but the Vatican Council restored it as a permanent ministry with its own characteristics, he said.

“The restoration of the diaconate, if anything, should be provoking a deeper reflection on the plurality of ministries and charisms which are present in the Church,” Archbishop Martin told a packed pro-Cathedral.

Permanent deacons can assist the priest at the celebration of the Eucharist, can celebrate Baptism and Marriage and preside at funerals.

They are also involved in visiting the sick, prisoners and the bereaved and promoting awareness of the social teaching of the Church.

“The diaconate is not a substitute for priests; the ministry of the deacon indeed can also be a ministry to priests, recalling us priests to more effectively witness to service in our own lives,” said Archbishop Martin.

Turning to the men, he told them they had to learn to disentangle their lives from everything which “hinders the radical newness of the Gospel from breaking through into the realities of our time.”

The significance of their ministry was not linked with what they could do as compared to what a priest could do, he said.

“Difference in ministry is always something mutual and complementary, rather than being in competition of conflict.”

The Papal Nuncio, Archbishop Charles Brown and the Church of Ireland Archbishop of Dublin, Dr Michael Jackson were also present at the Mass.

After the Archbishop had performed the ordination, laying his hands on each of the men in turn, the wives of the seven newly ordained deacons helped their husbands to robe in the vestment of the deacon.

In the case of the widower, Tom Larkin, his son performed the service.

Afterwards speaking to CatholicIreland.net, Mr Larkin spoke of his joy. “The joy that is in my heart takes me over,” he said. As he is a widower, during the ceremony he took a vow to remain celibate for the rest of his life.

The Portmarnock man told CatholicIreland.net that the vocation to the diaconate had been with him all his life but became a stronger call when his state in life changed some years ago.

He loved the learning involved in the journey towards diaconate “studying theology at that level.” 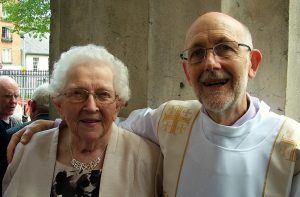 Newly ordained deacon Padraic O’Sullivan, a father of two from Rathfarnham, said he had experienced the closeness of his parents (both deceased) during the ceremony.

For him the diaconate means to “build bridges” also with members of other churches, the poor and those without faith.

“Above all to be an apostle of dialogue and unity – if I can do whatever I can for that, I’ll be happy,” he told CatholicIreland.net.

His wife Mary said she had been part of the preparation process with her husband for the last four years “so it is very much something we are doing together,” she said.

“While it is his ministry I still feel very much part of it with him so this is an exciting day for us,” she said.

Congratulating the new deacons at the end of the Mass, Archbishop Martin repeated that while there was diversity of ministry and diversity of service, “we all work together. We are not in competition.”

Our major task is to live and spread the joy of the Gospel, a task for the entire Christian community.

“As we go away [let us] not just think about deacons – think about the diversity of ministry here. That is the strength that Jesus Christ has given us in our Churches,” he concluded.