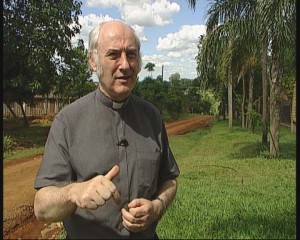 65-year-old Fr Hayes, from Cappamore, was the founder and administrator of several Cheshire Homes for children and adults with severe physical and intellectual disability in Oberá, Argentina.

Senator Mullen worked at the homes for a brief period as a volunteer in 2004.

“Fr Liam Hayes was a remarkable person whose kindness and concern for some of the world’s most forgotten people made a powerful impact on all those he knew and worked with,” Senator Mullen said in a statement on Monday.

After studies in UCC where he was Student Union President, Fr Hayes went to Maynooth and was ordained a priest for the Divine Word Missionaries.

In the mid-1980s, he travelled to Argentina to do parish work in the province of Misiones in North-Eastern Argentina, where he would spend the rest of his life.

In Misiones he came across many children and adults with physical and intellectual disability who were severely neglected.

Some were abandoned and some were with family members unable to take care of them. Fr Hayes had sleepless nights about this.

His religious order and the local bishop gave him permission to work full-time in caring for these abandoned people.

This led to his foundation of several Cheshire Homes, places which he once described as ‘centres of prayers and centres of care’.

“They were certainly places where some of the world’s most forgotten people were loved for themselves,” the Senator said.

He explained that he “had the privilege of spending a few short weeks in the homes back in 2004.” 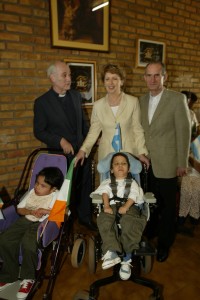 Former President Mary McAleese and various government ministers from Ireland also visited over the years and the Irish State was generous in providing capital towards the development of the homes along the way.

Many people in Ireland and Britain raised money in their parishes and elsewhere towards the running costs of the homes.

In recent years, the importance of the homes and of Fr Liam’s work was recognised in Argentina and there has been increased support from within Argentinean society.

Senator Mullen recalled, “Fr Liam was fully committed to his work in Argentina but leaving Ireland was hard for him too. He missed the simple things like the feel of the local newspaper in his hand and the sweets or foods that you could only get in Ireland.”

“He asked me to bring out some Batchelor’s beans when I was travelling to the homes in 2004. But he also asked for the Aer Rianta and National Roads Authority annual reports. I understood his great interest in transport policy when I visited him in Northern Argentina. He would say many masses in out-of-the-way places each weekend. But once he left the main road he was driving on earthen tracks. If there was flooding, he could be stranded for hours.”

The Senator said Fr Hayes believed fervently in the dignity of every human life and welcomed people of all creeds who wanted to help in the homes.

In his annual Christmas letter, he would recount all the visitors and residents from the previous year, but also those who had died.

He faced his own suffering with the same faith and hope that marked his life and work.

“He is now with those people whom he and his staff befriended, who went before him and whom he never failed to recall.”

Fr Liam Hayes will be buried in Misiones, Argentina on Wednesday.