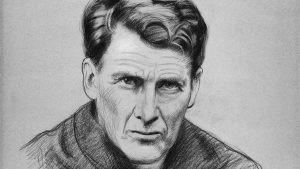 The date for the beatification ceremony of Blessed John Sullivan elect has been confirmed for Saturday 13 May in St Francis Xavier’s Church, Gardiner St, Dublin at 11 am.

This Church was chosen because it hosts the remains of Fr John Sullivan SJ in a tomb in the church. The ceremony will be attended by Cardinal Angelo Amato, Prefect of the Congregation for the Causes of Saints, as well as the parish priest of Gardiner Street parish, Fr Gerry Clarke SJ.

The beatification will be the first ever ceremony of its kind to take place in Ireland.

John Sullivan was born in Dublin in 1861 to a wealthy Protestant father and Catholic mother. At the turn of the century, while working as a barrister in London, he converted to Catholicism. His reception into the Church was at Farm Street, the centre of London’s Jesuit community, and he entered the Jesuit novitiate in 1900. He worked as a teacher in County Kildare and later as a rector on the outskirts of Dublin.

Much of his priestly life was spent in the Jesuit-run Clongowes Wood College, Co. Kildare. In 1960 he was declared a Servant of God. He was declared ‘Venerable’ by Pope Francis in November 2014. In April 2016 Pope Francis approved a decree that authenticated a miracle attributed to Fr Sullivan, thereby approving his beatification.

The miracle saw a Dubliner, Delia Farnham, make a miraculous recovery from a neck tumour in 1954. Among the other healings attributed to him is one of Michael Collins, nephew of Michael Collins, founder of the Irish Free State in 1928, who was paralysed as a young boy but suddenly walked after Fr Sullivan touched his leg and prayed over him.

Fr Toni Witwer SJ, the General Postulator for the Jesuits who is overseeing the beatification of Fr Sullivan, was in Dubin this week to help with the arrangements. The Austrian Jesuit will assist with the governance matters attendant on the event and continue to work on issues arising from the ultimate canonisation.

Speaking about the forthcoming beatification to Irish Jesuit Communications, he said “The miracles are coming from ordinary believers. For canonisation, we need another miracle after the beatification, meaning that John Sullivan would be considered as a saint in heaven and for the whole Church”.

Speaking about the communion of saints and their importance to our everyday lives, Fr Toni says “The Church is a Church of the living and the dead; we have a vocation from the beginning of the world and this vocation doesn’t finish with death. And so we pray especially to the saints in times of need and suffering, who have a deep relationship with God and who are known by us”.