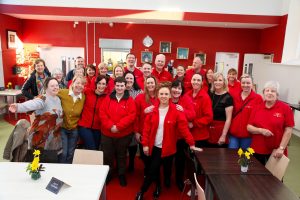 Staff and volunteers at the opening of the new Crosscare Community Cafe in Dun Laoghaire. Pic John Mc Elroy.

Archbishop Diarmuid Martin of Dublin, blessed and officially opened the new Crosscare community café in Dun Laoghaire, which is currently providing 50 meals a day to those in the local community affected by food poverty and social isolation.

The Archbishop said the café was only possible because of the tireless work of many local volunteers who turn up every day to help those most in need.

Speaking to CatholicIreland.net, Michael McDonagh of Crosscare’s Food and Community Services, explained that the café is working with those most in need in the local Dun Laoghaire area, many of whom are affected by isolation, substance use issues, and food poverty.

“The Café is open to everyone and we encourage as many people from the local community to pop in and see our service in action,” he said. Asked about those most likely to use the new service he said there were “lots of young families who may be struggling financially, and lots of elderly people who are really just lonely and want a warm and welcoming environment to mingle with others”.

This is a stand-alone service, though Crosscare also operates a Youth and Homeless Services in the vicinity and those using this service also frequent the café. Local fundraising endeavours and the support of the Dublin Archdiocese has enabled the café to operate.

According to Michael McDonagh, “Without regular fundraising the initiative could not survive. The café is a new model with more than 90% of the work carried out by volunteers who are essential in the day-to-day running of the service. It’s a local community café which is run by the community.”

Speaking about the wider context and the food bank operated by Crosscare, Michael McDonagh commented, “Unfortunately a rising tide does not lift all boats! Many of the issues people have when accessing the food bank are not being addressed with the improving economy.”

“The demand continues to grow and the issue of child hunger has become of particular concern to us here in Crosscare, particularly in the areas of D.E.I.S. schools. We are working to support the schools and their school food programme with partners like Kelloggs.”

“The children in these areas come to school earlier, and receive a breakfast and substantial lunch and are often given stuff to take home too, this is all great until we have a school holiday and all of a sudden that regular assistance is gone.”

“Lots of schools we are working with, reported in January the high concerns they had with children returning after the Christmas break showing visible signs on malnutrition and unable to concentrate or complete school work. This is something we want to address into the future.” 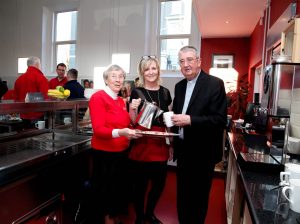 Crosscare’s information and advocacy service supported 4,600 individuals or families from over 125 countries, many of whom presented with multiple issues.

The social care agency of the Dublin Archdiocese’s addiction service provided 690 counselling sessions for 94 clients and engaged 700 parents in talks on addiction and related matters.

Through the community college, 164 courses were attended by 722 students and 58,080 support phone calls were made to older people and vulnerable adults.

The six community food banks operated by Crosscare distributed 14,321 food parcels and 184,711 meals and snacks were served through Crosscare’s community cafes, meals-on-wheels services and homeless residences. The main food bank redistributed close to 900 tonnes of food and non-food items, donated by manufacturers, distributors, growers and the public, to Crosscare projects and other charities.

On the youth front, 486 young people and their families were supported by Crosscare’s teen counselling projects.