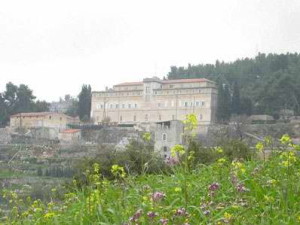 Bishop Declan Lang, Chair of International Affairs for the Bishops of England & Wales, has welcomed the Israeli High Court’s ruling against the extension of the separation wall through the Cremisan valley.

The extension would have meant that the wall would have cut through a Salesian monastery, convent and separated Palestinians in the nearby Christian village of Beit Jala from their olive groves.

After a nine-year legal battle, the court overruled a plan that would have divided the Cremisan monastery, near Bethlehem, stating that it “violated the rights” of the people of Beit Jala.

It rejected a route chosen by the Israeli defence ministry, calling for one that causes less upheaval to local people, the Salesian monks and nuns and their vineyards.

“The respondents should re-examine, as swiftly as possible, various alternatives to the route of the separation fence,” the court said.

The Cremisan Valley lies between the settlement of Gilo in annexed east Jerusalem and the smaller West Bank settlement of Har Gilo, a few kms to the southwest.

Israel began building the barrier wall and fences inside the occupied West Bank in 2002 at the height of the second Palestinian intifada, saying it was crucial for security.

“In practical terms, the decision means that the separation wall will not be built as planned for by the Israeli army,” said the Society of St Yves, speaking for the Salesian convent.

“The planned route was designed to confiscate a huge share of the privately owned lands of the people of Beit Jala in Cremisan as well as Vatican church land,” it said.

It added that the military will have to issue a new order for any future plans to build the wall in the area, and that the local population can submit a new appeal.

During his visit last year to Bethlehem, Pope Francis prayed at a section of the wall not far from Cremisan.

In his statement on Tuesday, Bishop Lang said, “I am delighted that the High Court of Justice in Israel ruled on Maundy Thursday that the extension of the separation wall through the Cremisan valley ‘violated the rights’ of the people of Beit Jala.”

He explained that the proposed wall through the Cremisan valley threatened to separate the 19th century Salesian monasteries and a convent school.

The Court has instructed the Israeli government to plan a new route, although it has set no time frame for the new plans.

“I am against all walls that separate communities from each other, let alone from their lands and their properties,” Bishop Lang stated.

“This judgment rightly puts paid to any attempts to weaken the status of Christians in this southern part of Palestine. Separating walls create difficulties in movement, access to worship and to education.”

He concluded by saying he shared “the joy of HB Fouad Twal, Latin-rite Catholic Patriarch of Jerusalem, in welcoming this decision”.

In January, the Israeli High Court announced that the defence ministry had dropped a plan to run the barrier through the Palestinian village of Battir, known for its ancient Roman irrigation system and agricultural terraces that are still cultivated today.

UN figures show that Israel has already built around two-thirds of the barrier.