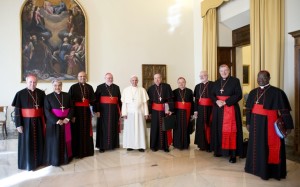 Pope Francis’ Council of Cardinals have signalled their intention to make substantial changes to the apostolic constitution, Pastor Bonus.

The constitution defines the duties of the Curia. The Vatican’s C8 discussed “significant new aspects” of a revised and reformed Curia.

According to Vatican’s spokesman, Fr Federico Lombardi, “The cardinals made it clear that they do not intend to make cosmetic retouches or minor modifications to Pastor Bonus.”

The proposed reforms would reflect the goal of “subsidiarity, rather than the exercise of centralised power,” according to Fr Lombardi and the Curial offices would be defined in terms of service to the universal Church.

The Director of the Vatican Press Office hinted that the Vatican’s Secretariat of State could also undergo significant changes. Archbishop Pietro Parolin is due to take up his new role as Secretary of State on 15 October.

Fr Lombardi, briefing journalists, said an important theme was the nature and functions of the Secretariat of State, which “should be the secretariat of the Pope; the word State should not give rise to doubt. This body serves the Pope in the governance of the universal Church.”

Fr Lombardi also indicated that the C8 were considering the creation of a new role titled ‘Moderator of the Curia’ which would act as a liaison between the Pope and the Curia.

“In this context, mention was made of the role of a ‘Moderator Curiae’ (moderator for the Curia), and the functions of such a figure. The issue was touched upon but no decision has been made as to whether it will form part of the new constitution; however, it is in fact one of the hypotheses suggested by the Council,” the Vatican spokesman said.

In their deliberations, the Cardinals also considered the role of the Synod of Bishops, which was a major point of discussion on the first day of their meeting.

Another thorny issue addressed related to finances and the Cardinals presented their recommendations about the future of the Vatican bank and the financial affairs of the Vatican as a whole.

The C8 are likely to meet again early next year. In the intervening months, the Cardinals and Pope Francis will continue to exchange opinions and messages until they meet again at the next plenary meeting of the Council.