Home > News > Two priests ordained in Raphoe and Down & Connor

Two priests ordained in Raphoe and Down & Connor 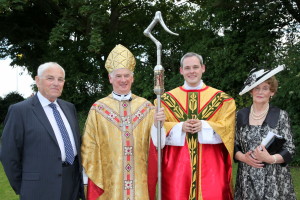 Fr Dominic McGrattan (30) was ordained at a ceremony in St Patrick’s Church, Portaferry by Bishop Noel Treanor, while Bishop Philip Boyce ordained Fr Stephen Gorman from Letterkenny in the Cathedral of Sts Eunan and Columba.

Fr Dominic is the youngest of Catherine and Bernard McGrattan’s seven children.

In August 2008, Fr Dominic entered St Malachy’s Seminary in Belfast where he began his formation for the priesthood and studied scholastic philosophy at Queens University Belfast.

In August 2009, he continued his formation programme in the Pontifical Irish College, Rome where he completed a degree in Theology at the Pontifical Gregorian University.

Following his ordination as a deacon in Rome in April 2013, Fr Dominic returned to St Edmund’s College, Cambridge where he is currently completing a Masters (M.Phil.) in Christian Theology.

In his homily on Sunday, Bishop Treanor told Fr Dominic and the congregation assembled for his ordination, that as a priest of Christ, like all ministers of Word and Sacrament, Fr Dominic is called to grow to the Petrine and Pauline level of personal human maturity, the maturity of the martyr.

“It is a life’s task. It is a spiritual adventure, marked with numerous milestones, many of which will bear the questions – ‘who do people say the Son of Man is ?’  and ‘who do you say I am?’”

“As you engage with this question at the heart of religious experience, as you engage pastorally with this betimes difficult and searching question together with others and for others, engaging with it as it emerges or erupts on the margins of contemporary lives, you will grow, Dominic, in humanity, in personal holiness and in the holiness of priestly ministry.”

“Direct engagement with this existential question of faith in Christ, in both personal and societal contexts, is the stuff of priestly ministry,” Bishop Treanor said and added that it is “a noble work, requiring wisdom and professionalism, learned over the course of one’s entire life from those experienced in life and in ministry and from those who supervise us and guide us.”

On Monday, the newly-ordained Fr Stephen Gorman celebrated his First Mass in his home parish of Aughaninshin in the Church of the Irish Martyrs, Letterkenny.

Today, Fr Gorman will celebrate Mass in the Cathedral of Sts Eunan and Columba, Letterkenny, and afterwards will give his first blessing to all present.

During the ordination Mass, Bishop Boyce highlighted in his sermon that a priest is a gift from God to His people.

He said, “Something happens that is not of our making. It goes beyond all that is humanly possible. We receive a gift from God. It is true that a response has been given by a generous heart, but it is from on high that the call came. The choice had to be first made by our Saviour, “You did not choose me, but I chose you and appointed you that you should go and bear fruit and that your fruit should abide” (Jn 15: 16).”

“We are not the makers of today’s grace: we are simply the recipients. Therefore, we do not boast; we simply give thanks to Christ, the High Priest of our salvation.”

Bishop Boyce said that both Saint Peter and Saint Paul were keenly aware that their calling and the grace to remain faithful was not their own work, but Christ’s gift.