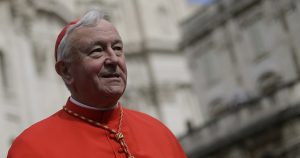 The heads of the Commonwealth states have been urged to promote democracy, peace, dignity of the human person and the common good by the leaders of the Catholic Church and the Church of England in Britain.

In a statement, Cardinal Vincent Nichols, President of the Catholic Bishops’ Conference of England and Wales described the Commonwealth as a wonderfully diverse community of nations and organisations that work together to promote prosperity, democracy and peace.

“These values are intrinsic to promoting the dignity of the human person and the common good, both of which are at the heart of Catholic teaching,” Cardinal Nichols said.

In a letter addressed to the Queen and the heads of the countries of the Commonwealth, Cardinal Nichols paid tribute to the Queen Elizabeth’s “personal commitment over many years to reinforcing the bonds of unity whilst celebrating the diversity of each nation.” 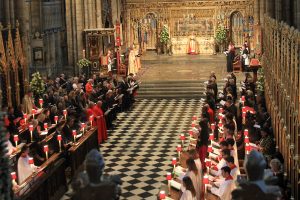 Evensong marking the 25th Meeting of the Commonwealth Heads of Government was held at Westminster Abbey on Sunday 15 April.

The head of the Church of England, Archbishop Justin Welby of Canterbury preached the sermon.

In his homily, he cautioned against hatred of “others”.

He noted that this was happening in the Commonwealth and across Europe especially in recent times where fears of immigration and of other faith groups has been prevalent.

Archbishop Welby said the Commonwealth would find its identity and its future would be a blessing to the world if “it is a body that loves the poor, brings home the refugee, cares for the stranger, eliminates unjust gain and corruption, guards the environment, and does so amidst diversity held together by a common humanity, and a vision of hope,” he said. 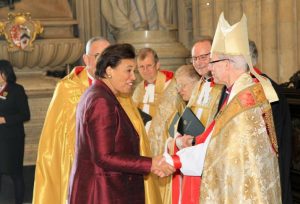 “Such a vision answers the needs of our time. Liberates the oppressed. It guards freedom of conscience and belief, and sets the names of its leaders before the history of the world,” he concluded.

The liturgy was attended by heads of government and High Commissioners from some of the 53 Commonwealth nations.

The biennial meeting of the Commonwealth nations is taking place in London and Windsor from 16 – 20 April.

It involves four forums on the themes of youth, women, business and citizens in venues around Westminster, London.

Foreign ministers from the 53-member countries will meet ahead of the formal Commonwealth Heads of Government Meeting (CHOGM) meeting at Buckingham Palace on Thursday.

On Friday the leaders will gather at Windsor Castle for a retreat.