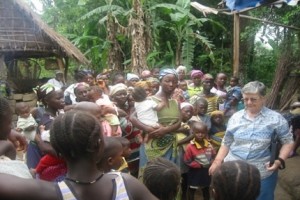 An Irish Sister of St Joseph of Cluny, who has been in Sierra Leone for sixty years, believes that governments around the world and international organisations have a responsibility to act with more urgency on the Ebola crisis.

“I was just so angry that they were too slow, taking it too easy, at the beginning, especially organisations like the World Health Organisation – which should be responding fast,” Sr Teresa McKeown of Streamstown, Co Westmeath said.

She returned to Ireland on holidays from Sierra Leone when the outbreak first occurred, but while she would love to return to assist her colleagues help the people, she is ‘grounded’ in Ireland for the moment.

“Now they are coming in, but you almost feel that it’s too late, too little too late,” she said of international efforts.

“I’m just hoping and praying that they get a drug [vaccine] that will be able to control it. Although a drug will control Ebola, the sickness itself, it won’t cure the poverty,” Sr Teresa said.

She has not been idle while grounded in Ireland and has been fundraising for the people of Sierra Leone. She spoke at Masses last Sunday and took up collections.

Of the Sisters who remain working in Sierra Leone, she said “They are scared. That’s the common word that comes through all the time. They’re scared and all I can tell them is take care.”

The Ebola crisis is destroying the development that has taken nearly a generation to achieve. 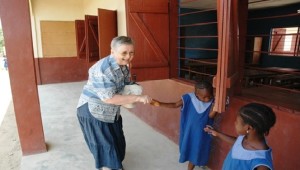 The people of Sierra Leone have survived civil war, which forced many to flee to refugee camps in neighbouring Guinea, and then they were forced to create new lives for themselves on their return to Sierra Leone. Now they are fighting Ebola.

The poverty is shocking according to Sr Teresa.

“Teachers, workers and drivers have no salaries, and these people are no longer working so they have nothing. So they are just literally starving, and the Sisters there along with a couple of lay people are beginning to distribute food,” said Sr Teresa.

Since August, Misean Cara which supports the development work of Irish missionaries, has allocated €98,000 to seven Emergency Response funding requests.

Last week, Misean Cara re-allocated another €250,000 to its Emergency Response Funding scheme so that missionary organisations like the Sisters of St Joseph of Cluny can access money as quickly as possible.

In Spain, tests for the Ebola virus have come back negative, indicating a cure in the case of Teresa Romero Ramos, the nurse who was first person to contract disease outside West Africa.

She was one of a team caring for two Ebola patients who had been evacuated from West Africa to Madrid for treatment. She was treated with a serum containing antibodies from Ebola survivors and anti-viral drugs.

The World Health Organisation (WHO) has stated that patients in the three West African countries devastated by Ebola may be able to get transfusions of blood from survivors within weeks.

Blood from survivors contains antibodies that could help the immune systems of people with Ebola to fight the virus.

Efforts are being made in Sierra Leone, Liberia and Guinea to make such experimental treatments available to slow the numbers of infections and save lives.

It is hoped that vaccines, which might protect some of those most at risk, will be available for trial in January.

Drug companies which are normally commercial rivals have been sharing data in a bid to speed up the production of vaccine.