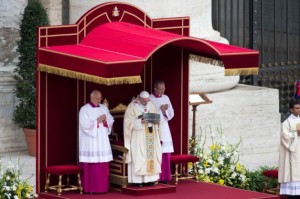 Pope Francis closed the Year of Faith on Sunday with a tribute to two of his predecessors.

In Rome, the Pontiff praised the initiative launched by Benedict XVI in October 2012 which was aimed at encouraging Catholics to learn more about their faith.

During the Mass in St Peter’s Square, what are believed to be the relics of St Peter the first Pope, were displayed publicly for the first time.

The veneration marked both the solemnity of Christ the King as well as the conclusion of the Year of Faith.

Pope Francis paid tribute to Benedict XVI’s initiative in his homily, saying the Year of Faith “gave us an opportunity to rediscover the beauty of the journey of faith begun on the day of our baptism, which made us children of God and brothers and sisters in the Church.”

The Pontiff also pointedly prayed for peace for Christians living in the Holy Land, Syria and in the entire Middle East, as he greeted the Patriarchs and Major Archbishops of the Eastern Catholic Churches present for the Mass in the Vatican.

Recalling Jesus’ promise to the good thief, the Pope said it gives the faithful “great hope” as it “tells us that God’s grace is always greater than the prayer which sought it.”

He added, “The Lord always grants more than what he has been asked: you ask him to remember you, and he brings you into his Kingdom!”

Following the Pope’s homily, a second collection was taken up for the victims of Typhoon Haiyan in the Philippines.

The relics of St Peter – eight small fragments of the Apostle’s bones – were displayed in a bronze chest. This is the first time in history that they have been publicly venerated. The bronze chest which contains the bone fragments is usually kept in the chapel of the papal apartments.

Pope Francis kissed the chest on Sunday as he held it in his hands and prayed before it during the course of the ceremonies.

The Vatican has never definitively declared that the fragments belong to St Peter. However, in 1968 Pope Paul VI said fragments found in the necropolis under St Peter’s Basilica were “identified in a way that we can consider convincing”.

However, archaeologists continue to debate their provenance.

The fragments were first discovered in a 1940 dig under St Peter’s Basilica. Archaeologist Margherita Guarducci discovered graffiti near an excavated tomb which contained the inscription in Greek ‘Petros eni’ which has been interpreted as ‘Peter is here’.

Tests on the fragments revealed they belonged to a man of between 60 and 70 who had been buried in a purple, gold-threaded cloth.