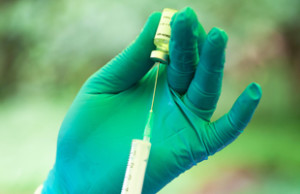 The Ebola vaccine rVSV Zebov-GP is being prepared for injection

The Word Health Organisation (WHO) is on the verge of proving the effectiveness of a new Ebola vaccine.

It has stated that results from a vaccine trial have shown it is “highly effective” and the trial should continue.

“This is an extremely promising development,” said Dr Margaret Chan, Director-General of the World Health Organisation.

“The credit goes to the Guinean Government, the people living in the communities and our partners in this project. An effective vaccine will be another very important tool for both current and future Ebola outbreaks.”

Mohamed Soumah, a 27-year-old, was the first person to receive the Ebola vaccine.

“It wasn’t easy. People in the village said that the injection was to kill me. I was afraid. I was the first one to be injected, the very first, here in my village on 23 March 2015. I’ve been monitored for 3 months and I’ve had no problems. The last follow-up, 84 days after the vaccination, was all clear,” he explained. 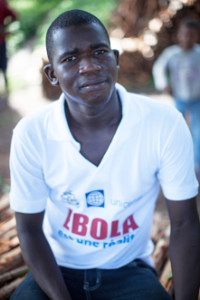 Mohamed Soumah the first person to be vaccinated

The independent body of international experts – the Data and Safety Monitoring Board – that carried out the review of the vaccine – has advised that the trial should continue.

While the vaccine so far shows 100% efficacy in individuals, more conclusive evidence is needed on its capacity to protect populations.

So the Guinean national regulatory authority and ethics review committee have approved continuation of the trial.

“This is Guinea’s gift to West Africa and the world,” said Dr Sakoba Keita, Guinea’s national coordinator for the Ebola response.

“The thousands of volunteers from Conakry and other areas of Lower Guinea, but also the many Guinean doctors, data managers and community mobilisers have contributed to finding a line of defence against a terrible disease.”

The method used in the trial is based on a smallpox eradication strategy. It works by vaccinating all people who have come into contact with an infected person, and creating a protective ‘ring’ to stop the virus from spreading further.

This strategy has helped to follow the dispersed epidemic in Guinea and will provide a way forward. 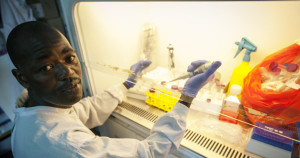 The Guinea vaccination trial began in affected communities on 23 March 2015 and to date, over 4 000 close contacts of almost 100 Ebola patients, including family members, neighbours, and co-workers, have voluntarily participated in the trial.

Now all people at risk are to receive the vaccine. A trial of the same vaccine on frontline workers has been running along with the ring vaccination trail.

Bertrand Draguez, Medical Director at Médecins sans Frontière said, “These people have worked tirelessly and put their lives at risk every day to take care of sick people. If the vaccine is effective, then we are already protecting them from the virus. With such high efficacy, all affected countries should immediately start.”

The trial is being implemented by the Guinean authorities, WHO, Médecins sans Frontières (MSF) and the Norwegian Institute of Public Health, along with other international and national organisations.

The trial has shown the power of “equitable international partnerships” according to the Wellcome Trust, one of the funders of the trial.

“This partnership also shows that such critical work is possible in the midst of a terrible epidemic. It should change how the world responds to such emerging infectious disease threats. We, and all our partners, remain fully committed to giving the world a safe and effective vaccine,” said Jeremy Farrar, Director Wellcome Trust.

A “turning point in the history of health R&D,” is how WHO described the collaboration.

Assistant Director-General Marie-Paule Kieny, who leads the Ebola Research and Development effort at WHO, said, “We now know that the urgency of saving lives can accelerate R&D. We will harness this positive experience to develop a global R&D preparedness framework so that if another major disease outbreak ever happens again, for any disease, the world can act quickly and efficiently to develop and use medical tools and prevent a large-scale tragedy.”

VSV-EBOV was developed by the Public Health Agency of Canada and licensed to NewLink Genetics which entered into a licensing agreement with Merck & Co Inc to research, develop, manufacture, and distribute the investigational vaccine.

Financial support was provided by the Canadian and US Governments, among others.

GOAL is involved in another trial of a vaccine to combat Ebola in Sierra Leone, with Johnston & Johnston and the London School of Hygiene and Tropical Medicine (see CatholicIreland.net 28 July 2015).