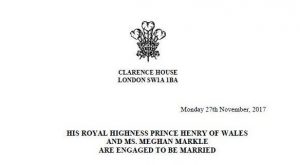 The Catholic alma mater of Meghan Markle, the fiancée of Prince Harry, has sent best wishes to the couple on their engagement as have the Church of England and Catholic Archbishops in the UK.

Meghan Markle, a USA based actress best known for her role in the TV legal drama “Suits”, attended the Catholic Immaculate Heart High School, founded in the Hollywood Hills in 1906 by the Sisters of the Immaculate Heart of Mary, who are originally from Olot, Spain.

The school tweeted: “Over 10,000 women of great heart and right conscience have graduated from Immaculate Heart, and we are proud to count actress and humanitarian @meghanmarkle among them. Today, we send her our very best wishes as she celebrates her engagement to His Royal Highness Prince Harry.”

The school stated that its graduates have “served with distinction” as artists, musicians, educators, journalists, doctors, lawyers, judges, and stars of stage and screen including Mary Tyler Moore, actress. Other  Immaculate Heart women were pioneers in professions not accustomed to having women.

Seniors graduate in formal ceremonies at the Hollywood Bowl. The school is located in the Catholic Archdiocese of Los Angeles and the High School draws its students from 65 parishes.

Some newspapers suggest that Ms Markle also has a Jewish background.  It has since been announced by Kensington Palace that Ms Markle will apply for British citizenship and be baptised into the Church of England and confirmed, before the marriage takes place in May next year. 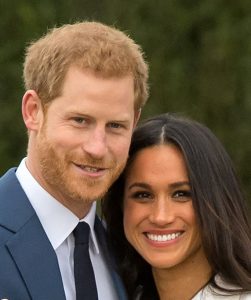 The Church of England Archbishop of Canterbury, Justin Welby, welcomed the engagement news on Monday 27th November 2017 stating, “I am absolutely delighted to hear the news that Prince Harry and Meghan Markle are now engaged.”

He said that he has met Prince Harry on a number of occasions and has always been struck by his commitment and passion for his charities, and his love for his family. “Marriage is a special and joyous commitment, one that Jesus celebrated together with friends at the wedding in Cana. I am so happy that Prince Harry and Ms Markle have chosen to make their vows before God,” he said. “I wish them many years of love, happiness and fulfilment and ask that God blesses them throughout their married life together.”

The Catholic Archbishop of Westminster, Cardinal Vincent Nichols, also sent best wishes stating, “I offer my congratulations to Harry and Meghan on the news of their engagement. We pray for their happiness as they prepare to make their life-long commitment to marriage.”

A statement from The Prince of Wales announced the engagement on 27th November 2017. Further announcements from Kensington Palace on behalf of Prince Harry said that the marriage will take place at St George’s Chapel, Windsor Castle in May 2018.