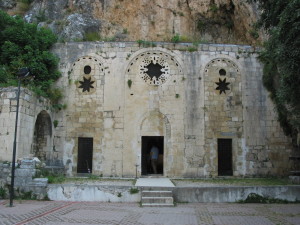 This Sunday, 29 June, the Feast of SS Peter and Paul, Christians from Antioch, Iskenderun, Mersin and Adana in Turkey will be allowed to pray in the ancient cave church of St Peter in Antioch.

The church is currently undergoing major restoration work and will not be opening officially until next month.

Capuchin Franciscan, Fr Domenico Bertogli, who is the local Latin Rite Catholic priest, and editor of the  magazine Chronicle of Antioch, said: “There is still much work to do… and the official opening is on 25 July. On the same day, the new archaeological museum, nearby will also open”.

The restoration of the cave church, which is built into the side of Mount Silpius, has been funded by public institutions in Turkey.

The most challenging part of the work involved the safety of the church and the entire area. Restored mosaics have been covered with sheets of glass and accented with lighting pavement.

Since 1967, thanks to Pope Paul VI, visitors can gain a plenary indulgence by making a pilgrimage to the holy cave, which is the only known remains of ancient Christian Antioch, the ‘Queen of the East that competed with Rome’, Alexandria, Jerusalem and Constantinople at the time of Pentarchy.

The cave church still retains many of the features added by the Crusaders, when they conquered Antioch in 1098.

But the history of the building is older than that – dating beyond Byzantium.

The cave into which the Church is carved is believed to have been used by the very first Christians.

It is believed by some that the founding of the church in Antioch can be traced to the Bible’s Acts of the Apostles (11:25-27) where it is related that Barnabas travelled to Tarsus to bring Paul the Apostle there.

They worked for one year with the Christian community, and there the converts were called Christians for the first time in history.

Christian tradition considers Peter, the first Apostle, as the founder of the church of Antioch, and the first priest of the Christian population that was established there; the Church of St Peter is regarded by tradition as on the spot where he first preached the Gospel in Antioch.

This was a chapel where Christians met in times of persecution and where St Peter was bishop before coming to Rome.