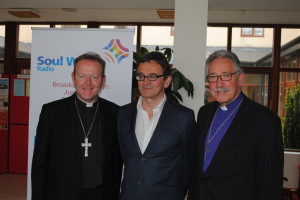 Christians need to be walking the streets of the digital highway looking out for those lying at the side of the road – witnessing to them in tenderness and love, the future leader of the Irish Catholic Church has said.

Archbishop Eamon Martin said the digital highway is a street teeming with people who are often hurting – men and women looking for salvation and hope.

He said that the internet provided the means with which Christians could go out to the peripheries and reach the ends of the earth.

Speaking at the annual Soul Waves Radio conference in Dublin with the Church of Ireland Bishop of Limerick and Killaloe, Dr Trevor Williams, who is a former BBC television producer, Archbishop Martin called on the church to give soul to the internet as part of its mission of evangelisation.

Speaking afterwards to www.CatholicIreland.net, Archbishop Martin said that looking at social media from the perspective of Christian evangelisation, the “power of the internet as a very positive medium” could be seen.

“What Bishop Trevor and I have been emphasising today is how we can use this wonderful technology to try to get the good news of Jesus Christ out there.”

However, Dr Martin also underlined that there are dangers associated with social media and the internet as with any new medium. He expressed particular concern over the prevalence of online pornography.

“I was very interested at the weekend to see those who are campaigning for an end to human trafficking telling us that there is a direct link between the commercialisation of sexuality, the commodification of human beings and human trafficking.”

He said the church and society at large had a responsibility to evaluate the impact of the new digital media and harness the wonderful potential it offered but while being aware of the dangers inherent in it, particularly for young people.

He suggested that some kind of boundaries need to be put in place to allow parents more control over what their children have access to.

The church’s task is to be present online not as aggressive and polemical “unchristian Christian” bloggers or as “pulpit thumpers”, but “walking the streets of the digital highway looking out in tenderness and love for those lying at the side of the road.”

According to the Archbishop, people in the church very often think of the new evangelisation only in terms of face to face evangelisation. 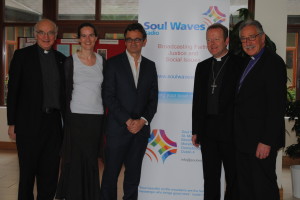 But he said that with 1.2 billion people inhabiting the Facebook country, a majority of which never come to church, evangelisers had no option but to get out and engage with this world.

The Archbishop also announced the launch of a “digital missionary movement” to coincide with next year’s 1,400th anniversary of the death of Irish missionary St Columbanus, who founded a number of monasteries across Europe, before his death in 615.

“I am calling on committed young people who have a strong faith in Jesus and who would like to become involved in shaping such a missionary movement to make contact with me to see if we can shape up an idea.”

In his address, Bishop Trevor Williams posed questions such as how do we communicate in the digital age.

He said the internet offered users the possibility of encounter, solidarity, personalisation, ubiquity and connectivity.

“Peoples appetite for social media is huge,” he told the Soul Waves conference and noted that if Facebook were a country, it would be the third largest on the planet.

Highlighting the potential for Churches online, he cited the London Internet Church as an example of how people sitting at a laptop can be led in prayer.

Unlike other promotions, the Churches were promoting the Gospel, which was about giving, not taking. He suggested that there should be no asks, over promotion of events or pleading for volunteers.

“Social media is a must for mission”, he said though he also underlined that offline trumps online.