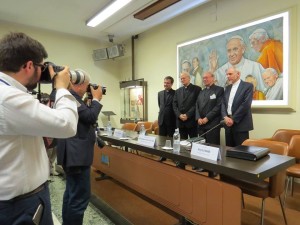 The CEC-CCEE Joint Committee meetings finished with a  press conference in Rome.

As the European Union proposes to introduce refugee quotas for member states, Christian Church leaders have called for an end to exploitation of migrants in the Mediterranean.

Under a plan to be published on Wednesday, the EU is expected to impose migrant quotas on the 28 countries of the union.

The number of refugees sent to each country would be decided according to a “redistribution key” based on GDP, population size, unemployment rate and past numbers of asylum seekers.

In the same plan the EU hopes to target the traffickers in military style attacks on their boats in Libyan territory, however this action will need a UN mandate.

The military aspect of the plan is expected to be welcomed by European member states but no such consensus exists for the proposal for mandatory relocation of migrants and certain countries will object to it.

Last week when Pope Francis met with participants of a joint meeting of the Council of European Bishops Conferences (CCEE) and thehe said:

“Faced with the attitude that Europe seems to have toward the dramatic and often tragic emigration of thousands of persons fleeing war, persecution, and misery, the European Churches and ecclesiastic communities have the duty to promote solidarity and hospitality.

European Christians are called upon to intercede with prayer and by actively working to bring dialogue and peace to current conflicts.” 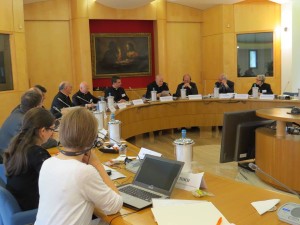 The CCEE brings together Catholic leaders from up to 40 European countries, while the CEC represents over 100 Anglican, Orthodox and Protestant churches across the continent.

Their programme last week under the theme ‘Freedom and liberties: A Christian approach’, included discussions around the challenges of upholding religious freedom in Europe today and the need to protect the rights of all people, especially the poor and persecuted.

In their joint message at the end of the meeting the Church leaders:
– denounced violence against women in the name of religion.
– called for an end to human trafficking and exploitation of migrants in the Mediterranean.
– called for solidarity with the Roma peoples of Europe.
– called for the protection of God’s creation especially ahead of the climate change conference in Paris in December.
– called for a freedom that chooses hope over despair, and solidarity with young people struggling to find work and raise families.

“Seventy years after the end of World War II, we pray for lasting peace in Europe and the whole world, which is the fruit of all justice,” they stated.

They stressed the importance of having single voice as Christians in Europe in defending human rights and religious freedoms.

In an interview with Vatican Radio Anglican Bishop Christopher Hill, president of the Conference of European Churches cautioned that one man’s “liberty” might be oppressive to another and sometimes individual liberties, exercised without self-restraint, don’t include the common good.

He said these issues raise very practical questions like use of religious symbols and clothing which can get politicized by extremists or used by “overly political correct administrations to curtain religious freedom”.

Bishop Hill stated that in Britain and other European societies many people think “religion is OK providing it’s a private hobby” but he says all the monotheistic religions emphasize the community dimension of faith.

When Churches speak together, he says, there is “strength in unity” and institutions are much less likely to dismiss their concerns as the claims of individual religious groups.

Retired Catholic Archbishop of Southwark in the UK, Kevin McDonald said that the Charlie Hebdo affair was part of the background to the meeting, and it was important that Christian leaders from the European Union meet together to highlight how the future of the European Union and the place of faith in Europe needs to be addressed “as a matter of urgency”.

For Christians, Archbishop McDonald said, the meaning of freedom is being able to love God and to reach out to love others.

Attempts to “privatise” religion means that people are not free to explore and express their identity in the public space. He pointed to Pope Benedict’s words during his 2010 visit to Britain when he spoke of the importance of religion in proposing values that should be codified in law as an expression of the common good of all people.