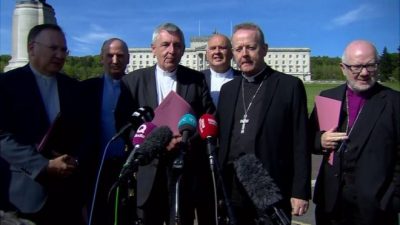 The leaders of the four main Christian churches have jointly appealed to politicians in Northern Ireland to show “courageous leadership” and “find a resolution to the political impasse”.

In a statement issued on Tuesday, the heads of the Catholic Church, Church of Ireland, Presbyterian Church, and Methodist Church, as well as the President of the Irish Council of Churches, said they were adding their collective voice to support and encourage everyone taking part in this new round of political talks to seize the opportunity for a new beginning.

“In welcoming this fresh initiative, together, we hope and pray that there will be substantive progress over the next number of weeks that builds relationships, bridges the gaps that remain and leads to the establishment of a sustainable power-sharing executive – one that is built on accommodation and trust, has reconciliation at its heart and is focused on the common good and welfare of all.”

Recalling their meeting with the five main party leaders last autumn, and the series of meetings on the ground which they organised with elected representatives and representatives of civil society, the Church leaders said they have been impressed by the genuine willingness of those involved to engage.

“At the same time, we all need to be realistic about the significant challenges that lie ahead in finding the necessary agreement,” they acknowledged.

Northern Ireland has had no functioning devolved government since Stormont collapsed in January 2017. It has instead, effectively, been run by civil servants, as all attempts to restore power-sharing have since failed.

Power-sharing collapsed after it emerged in November 2016 that a Renewable Heat Incentive, which was signed off by First Minister Arlene Foster of the DUP in 2012, had been mismanaged and had cost the Northern Ireland Executive £480m.

In their statement, the religious leaders highlighted that in their churches and faith-based charities, “we are witnessing daily the damaging and continuing impact of not having a functioning devolved government”.

They warned that there is “a growing sense of hopelessness and even despair at the lack of progress” across the community in Northern Ireland.

“The Lord Jesus calls us all to go the extra mile for one another and to do what is necessary for the greater good,” they said in their statement.

Acknowledging that the timing for the talks may not be perfect, they said they “believe this to be a fresh window of opportunity, born of tragedy, but nestling in hope for a future that now requires courageous and compassionate leadership.”

They also warned that at times we can all become so focused on the issues that are significant to us, that we can fail to adequately take into account the concerns that are important for others.

“A way forward can be found when we all have a genuine desire to find a balanced accommodation that can serve the common good. That can be a difficult, but not impossible task. Today we want to support and encourage all those taking part in the search for such an accommodation.”

Separately, a new report on sectarianism in Northern Ireland launched on Tuesday in Belfast has recommended that a dedicated government department should be set up specifically to tackle sectarianism.

Sectarianism in Northern Ireland: A Review was compiled by Professor Duncan Morrow from Ulster University (UU), along with members of the Sir George Quigley Fund committee.

The report warns that sectarianism – both religious and political – “shows no sign of going away.”

Responding to the report, Archbishop Michael Jackson of Dublin said it “takes the on-going reality of sectarianism by the short hair.

“It moves everyone forward from conversation to commitment, from argument to action in intensely practical ways. Its purpose, along with the Conference in which its launch is set, is to prevent those who shape society and claim a stake in the common good, churches included, from kicking the can any further down the road.”

Among the report’s 50 wide-ranging recommendations is a call for the leaders of all major churches to run an agreed programme to encourage respect for other faiths.

“Such a recommendation is a clarion call to everyone involved in religious activity, not simply leaders, to move beyond sectarianism and beyond the binary definitions of faith and of religion as denominational entities within inherited Christianity,” Dr Jackson said.

He added that it is a call to encourage respect for faiths in an Ireland that, in its entirety, is multi-cultural and multi-faith today and he noted that people of more than 200 ethnicities of origin live on the island of Ireland in 2019.

Archbishop Jackson said the broad questions for members of the Church of Ireland, as they embark this very week on their General Synod and during the Year of Commemoration of Disestablishment 150 – the theme of which is ‘free to shape our own future’ – are:

–       What does it mean to us today to be an all-island church and how do we express our co-operation as a response to this analysis both South and North?

–       How do those of us residing in the Republic of Ireland and claiming to be part of an all-island church accept our own role in perpetuating negative stereotypes and incapacity to achieve true reconciliation?

–       What will it mean to take ourselves not to so much by the short hair but to take one another and those who are our neighbours by the hand and address the findings on identity, exclusion and inclusion showcased by the Report?

“Spearheading with others right across the community an outworking of The Hard Gospel issues in the border areas of Northern Ireland and the Republic of Ireland, I found significant commitment on the part of my own people to cross-community work of reconciliation, particularly following the Enniskillen bomb.

“During an equivalent time in Dublin and Glendalough, I remain painfully aware of the need to keep this work going in order to enable an understanding of how all on this island are tied into such work of reconciliation combatting sectarianism and need each another practically, prayerfully and respectfully.

“I have also seen the flourishing of respect in Dublin and Glendalough across World Faiths and the embedding of the dialogue of life and humanity together with the dialogue of ideas culminating in the agreeing and issuing of the Dublin Interfaith Charter in 2018.”