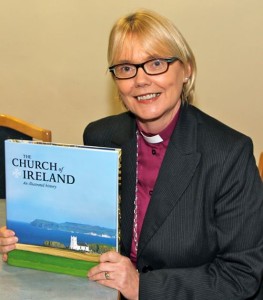 The Church of Ireland is considering new ways of accommodating those called to ministry later in life according to its first woman bishop.

Bishop Pat Storey of Meath & Kildare told CatholicIreland.net that currently there are between 30-40 men and women in training for ministry.

“It is not unhealthy – but the numbers are still smaller than they used to be; there used to be maybe 50. So we are certainly not sitting on our laurels.”

She said very often these days people are called to ministry in later years – in their 30s and 40s and that for some that means leaving their family to go and train in Dublin.

“That is very complicated with a mortgage and a family – but people still make huge sacrifices to do it. If you want to stay at home and keep doing your job, it takes you nearly seven years to train on a part-time basis – so it isn’t easy. The older you get the more complicated that is.”

Bishop Storey believes the Church is going to have to look at local ordained ministry so that people do not have to leave their homes and families to go to college to study or alternatively training for seven years part-time in order to be ordained.

“All sorts of options are being looked at,” she explained.

Local ordained ministry hasn’t happened yet, “We are discussing but it hasn’t come to Synod yet. It is really something that would facilitate people being ordained and staying within their own community. They don’t have to come apart to live in college and leave their families or if they want to go part-time that it wouldn’t take seven years to do it. You can imagine if you are in your 50s – you don’t want it to take seven years.”

However, according to Bishop Storey, while local ordained ministry is being considered “it may take a long time to come through”.

She recalled that the Church of Ireland training college for ministers used to be “full of 23 year old men who had come straight from their primary degree. There is nothing wrong with that – Earl did that,” she explained of her husband Rev Earl Storey.

However, she added that a lot of people now are going into professions and 15 years down the road considering a career change and deciding to do something different with their lives.

“I was in my mid-30s when I decided I wanted to do something different with my life. Very often vocations come much later on and life experience is a wonderful asset.”

She said some people take early retirement at 50-55 and they want to pursue ministry. “So we need all sorts of models of ministry – one size doesn’t fit all anymore.”

The 54-year-old Belfast native and mother of two adult children was ordained as Bishop of Meath & Kildare just over a year ago.

She told CatholicIreland.net, “I am probably enjoying it a lot more than I thought I would. For the first 48 or 72 hours you are so daunted by the prospect and it is so new to you, that you can’t even think logically about it. I would say it took me a while to really think straight but I am absolutely loving it – it is a great job. It is a job that I would never have sought but I feel like it is a round peg in a round hole… I feel like I fit.”

Bishop Storey served as a curate in Derry before her historic selection in September 2013 by the Church of Ireland’s House of Bishops. She describes her role as a bishop “to pastor the pastors” because it can be a lonely job for those in ministry.

She has 25 clergy ministering in the diocese of whom 18 are full-time rectors and the other seven are non-stipendiary ministers who do it on a part-time basis in conjunction with their own job.

It was 23 years between the ordination of the first woman priest in the Church of Ireland and Bishop Pat Storey’s appointment as a bishop last year.

“That is long enough for women to become senior in the Church,” though Bishop Storey admits that there are still conservative elements in the Church of Ireland who wouldn’t agree with women bishops or even the ordination of women.

“It can be misogynistic but it is not always – sometimes it is genuinely a theological point of view.”

“I would believe that 52% of the population was unrepresented in ministry until relatively recently and it is so important that women play a full part – not just as people that make the tea,” she commented.