Christians join together for Belfast talk by Luther expert 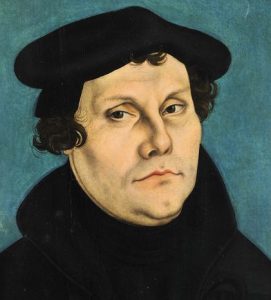 To mark 500 years since the Reformation, a Catholic priest is to speak about Martin Luther in a Presbyterian Church in Belfast.

Rev Dr Hubertus Blaumeiser, a priest from the Diocese of Augsburg in Germany, and a Catholic expert on Martin Luther, will speak on 2nd November 2017 at the event organised by Corrymeela, Focolare and the Clonard-Fitzroy Fellowship.

“In the midst of many “Reformation” events in different places, it’s a joy to have this opportunity to host an event co-sponsored by different denominations here in Belfast, and be a witness of Christian Movements working and praying together,” Irene Jovaras of Focolare told Catholicireland.net.

“With the 500th anniversary of the Reformation coming up, our conversations were focusing on how we could engage people from different streams of Christianity together at an event honouring these 500 years of our diverse traditions,” he said.

“To have a Catholic scholar of Luther who will speak with warmth and insight about the one whose actions contributed so enormously to the reformation is a gift. For us, in our public engagements, we wish to engage content, but we also wish to engage content with a tone of courtesy and a spirit of friendship.”

Dr Blaumeiser was present at the signing of the joint Declaration on the Doctrine of Justification in 1999 in Augsburg, and at the Lutheran – Catholic commemoration of 500 years since the Reform on 31st October 2016 in Lund.

On a special programme about the Reformation on BBC Ulster’s Sunday Sequence, Dr Blaumeiser spoke of the Lund event as “an experience of brotherhood” between Lutherans and Catholics who accepted one another, listened to, respected and welcomed one another, prayed together and committed to witness together the message of Christ.

The Lund Prayer Service involved thanksgiving for the fruits of reformation, and the renewal it brought in the life of the church, for example by refocusing on the central aspects of the faith and of the gospel.

Repentance was very much part of the event as there was injustice and persecution by both sides of the Reformation and many thousands of people were killed. “Lutherans and Catholics recognised this and asked forgiveness from God and one another,” he said.

To the question of the divisions that still remain he said that in the history of 500 years there are many wounds, and that Churches have lived separately with different mentalities. However, in the last 50 years there has been good dialogue. He suggested that as well as having theologians involved, there is a need to bring the dialogue to the people and “to concrete communities” and when this is done “Christ will be in our midst.”

When asked whether Christianity might be under threat from within he said, “Honestly I don’t feel a threat for the church I feel hope, because God is there, the spirit of God works in Christians but in all people.” He added, “If we give witness (together) we have a good future before us.”

He concluded that in Luther’s time God was seen as a judge like figure giving out punishment or rewards. Luther focused on the scriptures where he found a God of mercy, who loved good people but also sinners.“Luther experienced that the word of God, if we live it and receive it in faith, has a capacity to bring us to new life, to overcome selfishness, and help us live as Christ lived.”

Bishop Brendan Leahy, Bishop of Limerick, was also in Lund and spoke about it on the same programme and said, “We are in a place of dialogue today in a way we weren’t 500 years ago. I think Luther would have been happy to see the events last year with Pope Francis at Lund,”

He added that in preparation for the Lund meeting, Catholics and Lutherans brought out a publication titled From Conflict to Communion, which  examines the many dynamics involved in re-reading history, healing memories, not letting oneself be robbed of hope and keeping on starting again.

“That is a dynamic that goes on in all the churches all of the time,” he said.

Dr Blaumeiser has been living and working in Rome since 1983. Presently he is part of a research project on the spirituality of the Reform, which brings together different theological faculties in Rome including the Lateran University and the Sophia University Institute in Loppiano (Florence).

He is a member of the international Study Centre of the Focolare Movement, “The Abba School” where he represents ecclesiology and pastoral theology.

The event will take place on Thursday 2nd November 2017, at 7.00 pm at the Fitzroy Presbyterian Church, Belfast.