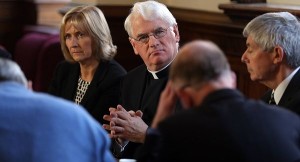 Catholic Social Teaching offers four principles that will be significant in the forthcoming local and European elections in Northern Ireland according to Bishop Noel Treanor of Down and Connor.

In a special pastoral reflection, the Bishop cited the four as the right to life; the upholding of the special value of marriage between a woman and man as the foundation of the family; the promotion of justice, social inclusion and concern for the poor; and the promotion of peace and reconciliation.

On Thursday (22 May 2014) the local council and European parliamentary elections will be held in Northern Ireland.

In his statement, Bishop Treanor described the elections as “an important opportunity for each of us as Christians and as citizens to influence the values that will shape future public policy at both local and European level.”

“How we vote is ultimately a matter of personal conscience” Bishop Treanor acknowledged and he reminded voters that as with every act that has moral consequences, “we are called to inform our conscience.”

“This means weighing up the position of each candidate and political party in the forthcoming elections and deciding how, in exercising our Christian responsibility to vote, we can maximise the common good.”

He stated that there was no more fundamental human right than the right to life. “Society has a duty to ensure such a fundamental right is protected for all, but especially for those who are most vulnerable and least able to protect this right for themselves.”

Acknowledging that the local councils and the European Parliament have no direct responsibility for the law on abortion in Northern Ireland, the Bishop argues that the influence of local councillors and MEPs on an understanding of public morality and its relationship to law and policy, is significant.

“It is important for those who believe in the equal right to life of a mother and her unborn child during pregnancy, and who believe that the direct and intentional killing of an innocent person can never be morally justified, to establish the position of each individual candidate on this fundamental moral issue,” Bishop Treanor said.

Of same sex unions, Bishop Treanor described them as “fundamentally and objectively different from the complementary sexual union of a woman and a man which is of itself naturally open to life.”

The position of a particular candidate on this issue was an important consideration for all citizens, he reminded voters, and he underlined that it was not just a religious issue.

“It is about upholding marriage between a woman and man as the fundamental unit of society, open to the possibility of children, an institution written into the very grammar of nature itself.”

It is also important for politicians to recognise that this issue is not only about ensuring Churches and faith communities are not obliged to officiate at same-sex “marriages”, he commented.

Respect for religious freedom also includes the right of Churches to teach on this issue in a respectful and sensitive way, to have the ethos of faith-based institutions in employment and other areas protected and of Churches to continue to provide services in preparation for and on-going support of marriage and the family, in a manner which is consistent with their ethos.

He warned that based on experience in other jurisdictions, this freedom is very often denied to Churches once “same-sex” marriage legislation is introduced and the rights and freedoms of individual Christians and Churches are quickly, often aggressively, undermined.

Church representatives were among the first to express concern about the potentially dramatic impact of the proposed welfare reforms on the most vulnerable individuals and families in Northern Ireland.

Local politicians deserve credit for ensuring that some important aspects of the proposed welfare reforms will not be implemented he commented.

Having an active concern for the welfare of the poor and most vulnerable is a fundamental Christian duty, deriving from the teaching of the Gospel and enshrined in Catholic Social Teaching, Dr Treanor reminded voters.

While supporting the principle of helping people out of welfare into work, the forthcoming elections are an opportunity to ask each candidate how they will work to ensure the needs of the poor and most vulnerable in our society are a priority and fully addressed.

On the promotion of peace and reconciliation, Bishop Treanor noted that many people express disillusionment with the seeming inability of politicians in NI to make progress on a wide range of urgent social, economic and educational issues.

“This includes the failure to reach agreement on issues that will help us to move to a more peaceful and reconciled future, such as flags, marches and dealing with the past.”

He said elected representatives on local councils and in the European Parliament have an important part to play in promoting and funding key initiatives in this area, as well as influencing their political party to work towards agreement and progress on such critical issues in the Assembly.

The promotion of peace, mutual understanding and reconciliation has also been at the heart of the European project and the work of the EU institutions. “The European Union is a noble and historic project,” he stated.

The Bishop said it was “vital” to participate in the European elections to ensure the EU and its institutions continue to evolve democratically in the face of the massive political, social, economic and ethical challenges it is now facing.

Promoting peace and reconciliation is fundamental to the mission and responsibility of every Christian, Bishop Treanor said.