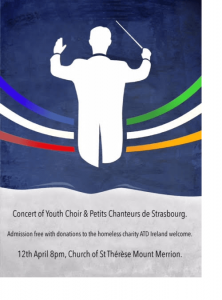 Voices united this week as members of choirs from Dublin and Strasbourg sang together.

They were part of the Dublin launch of the international ‘When Voices Unite’ project by All Together in Dignity Ireland (ATD). Their first combined concert took place at the Swan Youth Service, St Agatha’s Hall, Dunne Street, Dublin.

It is one of many global events taking place from New Orleans to Madrid, all of which seek to celebrate the dignity of people living in poverty. Local choirs sing alongside professional choirs and members of the community from all walks of life.

“This launch is the first in a series of singing events that will run from April through October with the project concluding on the 30th anniversary of the UN Day for the Eradication of Poverty, 17 October 2017. The final singing event will be broadcast by radios worldwide as people from all backgrounds come together to sing and unite their voices against poverty and social exclusion,” said Pierre Klein, Coordinator of ATD Ireland.

Choirs in Dublin included Les Petits Chanteurs de Strasbourg – Maîtrise de l’Opéra National du Rhin (the children’s choir of the Strasbourg Opera). Their conductor Luciano Bibiloni and 30 singers arrived to perform in Ireland during the Easter week with music by Handel, Purcell, Dowland, Debussy, Saint-Saens and many others. 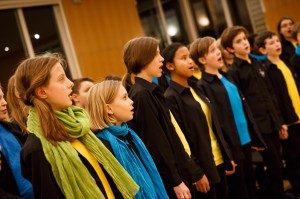 Irish music groups included young people from NYP2, the Swan Youth Service. CrossCare joined in by responding to the French performance with songs of their own. The event culminated in the groups singing together.

‘Hallelujah’ by Handel, the more modern ‘Hallelujah’ by Leonard Cohen and a unique version of ‘This Land is your Land’ were included in the repertoire.

“They sing their love, pain, dreams or memories, women and men, between the lines,” said Joseph Wresinski, the initiator of the UN Day for the Eradication of Poverty and founder of All Together in Dignity (ATD).

“Whether in Guatemala’s aldéas, as in [Haitian],  … African, Asian or European slums, everywhere I could hear families living in extreme poverty singing for their dignity.”

Cassam Uteem, former President of Mauritius and Chair or the International Movement ATD, said that those organising concerts in any neighbourhood, city or country will spread the word about people’s desire for dignity and help share a message of hope. 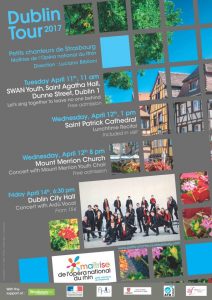 “You will join your voices with thousands of singers around the world and help grow the movement of people dedicated to leaving no one behind,” he said.

The Irish project was supported by the Impact Joe Lucey Small Grant Fund, the French Senate (thanks to French Senator Hélène Conway-Mouret), The Fondation ATD, Paris  and private donations. At the time of going to print, ATD Ireland was still looking for donations to cover the full costs.