Home > Featured > Children invited to pray the Rosary this Thursday

Children invited to pray the Rosary this Thursday 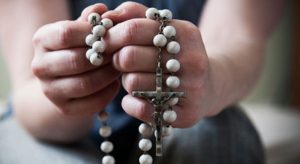 Up to one million children are expected to take part in a worldwide recitation of the Rosary this Thursday.

Organised by Aid to the Church in Need (ACN), this initiative dates back to 2005. A group of parents in Venezuela were inspired by the words of St Padre Pio, who once said, “If a million children pray the Rosary together, then the world will change.”

Participating schools and parishes are asked to recite the prayer at 9am on Thursday, 18 October, but recitations may be scheduled for other times of the day if that is more suitable for local needs. Cardinal Mauro Piacenza, president of ACN, said that in some jurisdictions Catholic schools were suspending their timetables in order to take part in the initiative.

In a letter calling on school principals and teachers to back the initiative, the Cardinal wrote: “We are all conscious of the extremely worrying political situation throughout the world today. For a long time now it has no longer been a matter of purely national conflicts. Many regions around the world have become a powder keg, which could so easily erupt into a worldwide military conflict.

“What can we do as Christians in this situation, even though we hold no positions of political power or responsibility? St John Chrysostom, the great Doctor of the Church, boldly reminds us, ‘The man who prays holds the helm of history in his hand’.”

October has long been known in the Catholic Church as the month of the Rosary. Pope Francis has asked the faithful to direct their Rosary prayers this year towards asking Our Lady and St Michael Archangel to protect the Church from the devil.

Aid to the Church in Need is a pontifical foundation that provides support to besieged and persecuted Christians across the world, but especially in the Middle East.

Resources for this Rosary initiative can be downloaded from the website.