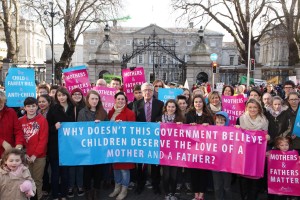 Professor Ray Kinsella and members of the group Mothers and Fathers Matter protest outside the Dáil on Tuesday. Pic: John Mc Elroy.

Legislators have been urged to oppose the ideology behind the Children and Family Relationships bill and to press for its amendment by the new group Mothers and Fathers Matter.

Speaking to CatholicIreland.net ahead of today’s Cabinet meeting to discuss the bill, spokesman Professor Ray Kinsella raised concerns over the bill’s impact on family life.

The bill will allow for parental rights to be given to different types of couples including those who use assisted human reproduction, same sex couples and parents who are with new partners.

“Common sense and our own experience – in addition to our Constitution – confirm the importance of children being reared by their natural parents,” he said.

“We should not be legislating to subvert this most basic entitlement of a child,” Professor Kinsella stated.

He added that “legislators have an enormous reprehensibility to oppose the ideology behind this bill, to press for its amendment and to create an economic and social environment that is supportive of families – not least in the kind of economic environment that has impacted all families in recent years”.

Though the details of the bill won’t be published until later in the week or early next week, Professor Kinsella said the aspect of it that most concerned Mothers and Fathers Matter was that it “destroys the preference for motherhood and fatherhood and the natural rights a child has to know their genetic parents”.

He said his group was asking the Government to amend the bill in order to take proper account of the “irreplaceable ties between a child and their natural mother and father alongside protecting their right to a relationship with them”.

He warned that as the bill stands, children can be commodified by gamete donation and while the child will now have a right to know their genetic parents at 18 – so much of the potential relationship will be lost during their growth and there is no incumbency on parents to even tell their children they were conceived through gamete donation.”

He urged the members of the Oireachtas to retain a preference for motherhood and fatherhood as it is understood in the current Constitution and laws. 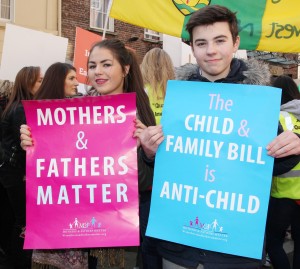 Mothers and Fathers Matter group held a lunchtime gathering outside the Dail as the Children and Family relationships (CFR) Bill was presented to Cabinet. Pic shows Chloe McKenna from Crossmaglen and Michael Malone from Co Meath. Pic John Mc Elroy.

“Follow the examples of countries like Italy and Germany and ensure that a child’s basic right to being conceived and nurtured by their natural mother and father where this is at all possible.”

He said Mothers and Fathers Matter also wanted to acknowledge some positive elements of the bill including improved access rights for grandparents and improved guardianship rights for unmarried fathers.

“We of course acknowledge and support the enormously important role of adoptive parents,” he said.

Speaking on Saturday to RTE Radio’s Claire Byrne Show, Bishop Kevin Doran said he was concerned that the bill would be rushed through without due consideration.

He told the programme that the Church has argued that the process of assisted human reproduction should be regulated and that there does need to be legislation around it.

“But our point was that it should be regulated in favour of the children – because children after all are persons in their own right – and not for their parents.”

“Sometimes the problem with this kind of legislation and the same sex marriage issue is it is all as if it is about the adults and that in some sense the children are for the adults – which we object strongly to.”

The Bishops’ spokesman on bioethics, who is also a member of the Bishops’ Council for Marriage and the Family, also told the programme that when it comes to adoption, the Church’s preference would be for a male/female couple and when it comes to assisted reproduction for the genetic mother and father to have precedence.

“Take a young woman of 14 to 16 years of age growing to maturity and her two parents are two men. They may be the most loving caring people in the world but how can they respond as two men to the human, personal and feminine needs of a young woman growing up,” he questioned.