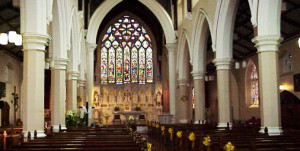 The popular Augustinian parish church was destroyed by fire on 2 January 2012 when a homeless man set fire to straw in the crib.

When the doors of the church were opened to tackle the blaze, the mixture of cold air and the gases emitted by the burning crib, precipitated an explosion.

The church’s stained glass windows were blown out and within minutes the fireball had wrecked havoc within the church itself.

However, almost two years on, the restoration of the 19th century neo gothic church is almost complete.

According to parish priest, Fr Niall Coughlan, “When people come back in they will be seeing what the parishioners saw when they first walked though the doors in 1858.”

One of the few positives to emerge from the fire was the discovery of an altar of French limestone which had been thought to be plaster due to its many layers of paint. The limestone is the same kind as that used for the church’s pillars.

The impact of the pillars, along with the new parquet floor, and restored pews is likely to delight those attached to the parish as a place of worship.

However, some work remains to be done. The organ will be replaced after Christmas, while the stained glass window behind the altar is still undergoing restoration and will not be ready until next summer.

The bust of Irish patriot, Kevin Barry, depicted as a saint, which dates from the 1920s remains intact. 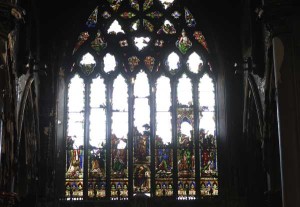 Stained glass window of St Catherine’s church in Dublin which was destroyed in the fire of 2 January 2012.

Today, a procession will leave from John’s Lane Church arriving at Meath Street for Mass 12.15pm which will be celebrated by Bishop Walsh.

In 1974, due to the opening of many new parishes in the suburbs and the declining number of clergy, the Augustinians were asked to take over the administration of the parish.

During the Celtic/Danish period a church or shrine to St Catherine existed in this area of Dublin.

Devotion to St Catherine of Alexandria was very strong throughout the country, and her feast day was observed as a holy day of obligation up until the 16th century.

The first documentary evidence of the existence of a church of St Catherine is found in the “credi mihi” in 13th century, where the church is mentioned as a chapel of ease of the monastery of St Thomas which was founded in 1177.