Catholic student is BBC Young Musician of the Year 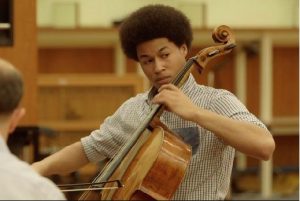 A student from a Catholic school in Nottingham has been named BBC Young Musician 2016.

Cellist Sheku Kanneh-Mason (17) from Trinity Catholic Comprehensive School and the Royal Academy of Music was chosen from three finalists who performed with the BBC Symphony Orchestra in front of a live audience.

They were judged by a panel of experts at the Barbican in London on Sunday.

Dobrinka Tabakova, who chaired the panel of judges, said the young musician was “electric. There was something about the way he drew the audience in. In today’s society, which seems to be swept by mediocrity, he shows how hard work, dedication and talent can lift you out.”

Sheku, who plays in the Chineke! Orchestra and the JRAM Symphony Orchestra, performed Shostakovich’s Cello Concerto No 1.

“I’m so grateful for all the support from my family, the Junior Royal Academy of Music, my teacher Ben Davies and Chineke! that have helped me on this extraordinary journey,” he said after his victory.

John Dexter, acting head teacher at Trinity Catholic Comprehensive School, commented “Sheku is our lad from our school, our family, and he was just wonderful. But he is also such a lovely young man – not an ounce of arrogance.”

“You don’t get to the final just by being amazingly talented – you need to work incredibly hard too. He is always encouraging other young musicians at our school and everyone is so proud of him.”

For more information, and a video see: http://www.bbc.co.uk/news/entertainment-arts-36299473