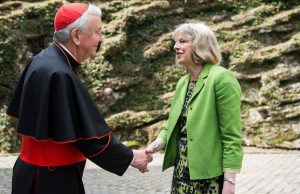 Cardinal Nichols with Theresa May

The leader of the Catholic Church in England and Wales, Cardinal Vincent Nichols, has written to Theresa May, the soon to be Prime Minister of the United Kingdom.

Recognising her judgement, resolve, sense of justice and integrity, Cardinal Nichols assured her of his and the prayers of all Catholics in England and Wales. He also looked forward to working with her across a broad range of issues in the service of the common good.

Mrs May has worked closely with the Cardinal, especially on the fight agaisnt human trafficking and modern slavery. She attended the first meeting of the Santa Marta Group in the Vatican in 2014, where in the presence of Pope Francis, police chiefs from over 20 countries committed to working with the Church in combating human trafficking.

He went on:  “I am personally delighted at your appointment. I know from the work we have done together that you have so many qualities to bring to the service of our countries at this time. I appreciate the maturity of judgement, the steely resolve, the sense of justice and the personal integrity and  warmth you have always shown.”

The Cardinal thanked Mrs May for the  “remarkable work” she had accomplished for the victims of human trafficking. “This is a clear indication not only of your determination to use high political office for the protection of some of the world’s most vulnerable people but also of your willingness to work with the Catholic Church at its highest levels.”

Cardinal Nichols assured Mrs May of his “personal support” and said he looked forward to working with her “across a wide range of issues in service of the common good”. 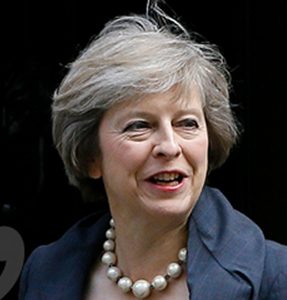 Theresa May, the only daughter of a vicar, grew up in rural Oxfordshire, in a family that revolved around the demands of her father’s parishioners. For two years she went to private school and then a local grammar before studying geography at Oxford.

According to the Guardian she enjoys a  “famously strong marriage” to Philip May, a banker she met at a Tory student disco.  But she has also had tragedy in her life, losing her father in a car crash shortly after she graduated, and her mother, suffering from multiple sclerosis, a year later. She married her husband  Philip, an investment banker, in 1980.  For health reasons the couple are childless.  “You look at families all the time and you see there is something there that you don’t have” she said in one interview.

Initially Ms May worked in banking. She was first elected to Parliament in 1997 as the Conservative MP for Maidenhead.  She has served as Home Secretary and Minister for Women and Equality. She is to take up residence in No 10 Downing Street today  (Wednesday) after Mr Cameron has formally resigned to the Queen.