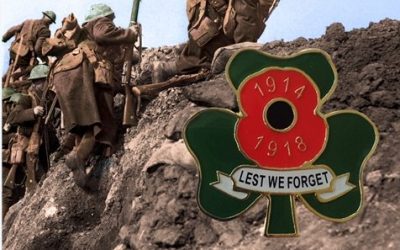 On the centenary of the end of  World War I, a Catholic primate of Ireland will for the first time take an active role in the Remembrance Sunday service.

This Sunday, Archbishop Eamon Martin of Armagh will preach at the early evening service at St Anne’s Church of Ireland Cathedral in Belfast. This service will be held to remember the fallen of World War I and the fallen of subsequent conflicts involving the British armed forces.

The development is a sign of how Ireland is now more willing to acknowledge the role that British identity and culture has played in Irish heritage. The Royal British Legion, which organises events commemorating the dead of World War I, World War II and other conflicts involving the UK’s armed forces, believes that public participation in Remembrance Sunday events will be greater this year than in recent decades.

Wreath-laying ceremonies will take place at 11am at the War Memorial Gardens at Islandbridge in Dublin, at the war memorials on the Mall in Cork and in Pery Square in Limerick and at various war memorials across the country.

Traditionally, Church of Ireland services on the Sunday closest to the anniversary of the armistice on 11 November have included prayers for the fallen, while the date has not been acknowledged during Catholic Masses on that day. This is despite the fact that the vast majority of the 300,000 men from this island who served in the “war to end all wars” were Catholic, as were the majority of the more than 49,000 Irishmen who died during the conflict.

The vice-chairman of the Royal British Legion Ireland office, Brian Crawford, said at least 600 people are expected to attend the commemoration services at Islandbridge. Because of the numbers expected, attendees are asked to park at the Royal Hospital Kilmainham nearby and to aim to be present in the War Memorial Gardens at 10.30am.

The Legion’s chairman, Brian Duffy, said he believed that the annual commemoration of the war dead has lost its sectarian and political connotations.  For years, many nationalists were opposed to any display of British sympathy such as the wearing of the British Legion’s poppy – sales of which go towards the support of former British military servicemen and/or their families who are in need.

Mr Duffy pointed to the fact that this year the Limerick branch of the British Legion has produced an enamel pin, depicting a poppy mounted on a shamrock, which Taoiseach Leo Varadkar wore in the Dáil earlier this week.

“It has no crown or harp on it, it has no Union Jack or Tricolour,” said Mr Duffy. “It is a very simple statement of remembrance and it is one that has been very well received across the island of Ireland, north and south of the border.”

The Remembrance Day service in Belfast tomorrow will be broadcast live on BBC 1 Northern Ireland and on Radio Ulster. It is expected to include a message from Tánaiste Simon Coveney referring to the greater sensitivity now shown in the Republic to the once-divisive issue of World War I commemoration services. It will conclude with the passing of a lantern from St Anne’s Cathedral out into the streets of Belfast, a symbolic gesture that is part of a “Battle’s Over” initiative taking place across the UK.

Elsewhere in Northern Ireland, Saint Michael’s Catholic Parish in Enniskillen will be joining with other church communities in the town in the most westerly of these “Battle’s Over” tributes.

Notably, Enniskillen was the first location on the island of Ireland to publicly proclaim the Armistice in 1918. It was also the place where, in 1987, 12 participants in Remembrance Sunday commemorations were killed by an IRA bomb placed near the town’s cenotaph.

Events tomorrow begin at 6am at Enniskillen Castle, where lanterns will be presented to representatives from each of the town’s church communities, with Msgr Peter O’Reilly, parish priest of St Michael’s, representing the Catholic community.

There will be a prayer service at the War Memorial at 11am followed by a service of remembrance at St Macartin’s Cathedral where Msgr O’Reilly will read the Gospel. At 6pm, the Liturgy of Evening Prayer will be celebrated in St Michael’s.

Each church community will then take part in a “Service of Light” by carrying the symbolic lamps, presented to them earlier in Enniskillen Castle, from St Michael’s to St Macartin’s, where a beacon will be lit by Viscount Alan Brookeborough, the Lord Lieutenant for County Fermanagh, to the sound of the Last Post played by the Fermanagh Massed Pipes and Drums.