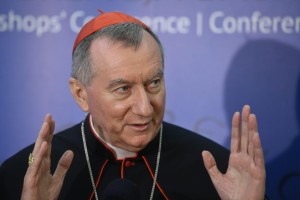 The Vatican’s Secretary of State has told catholic legislators that, as shapers of policy, their role is not only to live “in the midst of the world” but to also be “a leaven in the world” in favour of the family, the local community and your respective nations.

In his message on Friday to participants in the fifth annual conference of the International Catholic Legislators Network, Cardinal Pietro Parolin said the Church needed them and their mission, and they in turn needed the Church as mother and teacher of all.

The 28-31 August conference, which was held outside of Rome in Frascati, gathered Catholic parliamentarians from around the world to discuss the promotion of Christian values and morals in the political arena.

The network was founded in 2010 by Cardinal Christoph Schönborn of Vienna and the British parliamentarian, Lord David Alton.

Cardinal Parolin commended the lawmakers for being actively engaged in the public and political life of their countries and local communities, and for allowing their professional work to be nourished and guided by their Catholic faith.

“I wish to thank you for what you are doing to promote coherent Catholic witness in the world. I know that you are here because you are passionate about the ‘city on earth’ which seeks to root Christian morals and virtues ever more authentically in communities around the world, so that together we may reach the ‘City of God’,” the Cardinal said in his message.

Referring to the feast of St Augustine, he said the early church leader had dedicated his entire work, The City of God, to learning how to understand the present circumstances and to establishing a new order for living in society.

In her diversity of service to the world, the Church has a single mission, the Cardinal suggested, and cited Apostolicam Actuositatem to highlight that this mission is to restore all things in Christ.

“For this task, the Church needs you, active Catholic legislators, because your law-making is a vital part of the lay apostolate – to ‘have the Gospel spirit permeate and improve the temporal order’,” he said.

“As shapers of policy your role is not only to live ‘in the midst of the world’, but also to be ‘a leaven in the world’ in favour of the family, the local community and your respective nations. The great challenge for you is to bring your faith to bear upon the pressing issues facing the world today, that is, to dialogue with society and culture, and to humbly speak from the light which our faith offers (cf. Evangelii Gaudium, 238),” he said.

Recalling Pope Francis’s call in Evangelii Gaudium to “light a fire in the heart of the world”, Cardinal Parolin said this means, by your words, by your witness and by your legislative and political actions informed by faith, you are called to foster a more just society, centred on the dignity of the human person.

“The Church knows your work is not easy. She understands the many threats to family life, in the form of policies and laws that allow or even hasten the dissolving of the family. She is also fully aware of the urgent need to alleviate poverty and to support the integral development of society’s most neglected members,” he said.

The Secretary of State told the legislators that just as the Church needs them, they need the Church.

“She places at your disposal her sacraments, her wise counsel and her commitment to the moral truths of the natural law. She supports your ongoing initiatives to serve the common good through sound law-making.”

“For their part, the Holy Father and the Bishops encourage your work to further Christ’s kingdom on earth, in unity with their mission as pastors.”