One of the Church’s most senior prelates, Cardinal Louis Tagle, the former Archbishop of Manila, will be leading an evening of prayer and reflection evening with members of Young Church Dublin tomorrow evening at 6.30pm.

The cardinal, who was named prefect of the Congregation for the Evangelization of Peoples last December, is tipped by some as a future pope.

The cardinal is president of Caritas International, the Vatican’s umbrella organisation for Catholic aid agencies. Indeed, Cardinal Tagle is in Ireland at the invitation of this country’s main Catholic aid agency Trócaire, sponsor of tomorrow night’s event in conjunction with St Paul’s on Arran Quay.

St Paul’s Church is home to the Dublin diocesan youth service, Catholic Youth Care, and events there, such as tomorrow’s evening of prayer, are usually targeted at teenagers and adolescents. 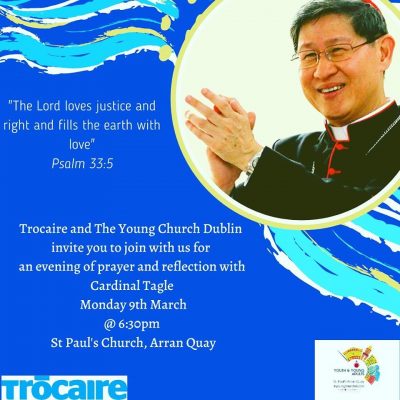 According to the official programme, the cardinal will be reflecting on Psalm 33:5: “The Lord loves justice and right and fills the earth with love.”

Observers will listen closely to see if the cardinal comments on the situation in his home country – before moving to Rome in January this year, he was a critic of Filipino President Rodrigo Duterte and his “war on drugs”.

Since the president was elected four years ago, police have been allowed operate a “shoot to kill” policy and as violence escalates, more than 22,000 people have been killed.

Cardinal Tagle is known to have a particularly strong affection for his homeland and its people and it is said that he was “heartbroken” when he learned that he was being called to Rome. Indeed, at his first public Mass in Manilla after the announcement was made, he broke into tears such was his level of grief.

Cardinal Tagle will be welcomed by the Young Church in Dublin when he arrives at St Paul’s on Arran Quay at 6.30pm tomorrow.