Home > News > New cardinals to be announced at February consistory

New cardinals to be announced at February consistory 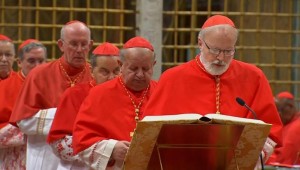 Pope Francis will appoint a number of new cardinals at a consistory in Rome next February.

So far there is no indication as to who the new cardinals will be. The consistory will take place on the Feast of the Chair of St Peter.

As of 21 October, there were 109 cardinals under the age of 80, who are therefore eligible to vote in a conclave.

However, that is 11 short of the maximum number of 120 advised by Paul VI. By February, that shortfall will have risen to 14 or more.

In the days ahead of and immediately after the consistory, a number of high level meetings are due to take place in the Vatican.

These include a meeting of the Council of Eight, the group of cardinals appointed by Pope Francis to advise him on Church reform. They are due to hold their third meeting on 17-18 February.

The Council of the Synod of Bishops will meet later in the month on 24-25 February.

Then at the end of February, the committee of cardinals appointed to supervise Vatican financial affairs is also expected to meet.

According to Vatican Radio, the Pope also intends to bring all members of the College of Cardinals together in Rome on the day before the consistory and it is expected that the cardinals will hear a briefing on the Pope’s plans for reform of the Curia and offer their suggestions.