Cardinal Pell speaks about role of laity in Cork 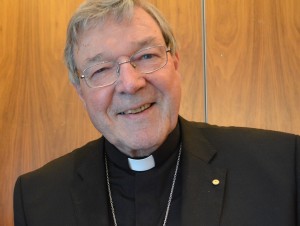 The Prefect of the Vatican’s Secretariat for the Economy has dampened down expectations of a major change in the Church’s position on the divorced and remarried.

Cardinal George Pell was speaking after he delivered a paper to the Fota VIII International Liturgy Conference in Cork on Monday.

Asked about the forthcoming Synod on the family, the Cardinal told CNS, “We’ve got no warrant to change the teachings of Scripture.”

On Cardinal Walter Kasper’s nine page essay in Stimmen der Zeit which maps out a penitential path for the divorced and remarried, Cardinal Pell was less than enthusiastic. “I think it is quite incompatible with the official teaching of the Church and with officially endorsed traditions.”

Cardinal Pell, who is one of Pope Francis’s Council of Nine advisors, told CatholicIreland.net that the teaching of Our Lord on adultery and marriage “is disconcertingly direct and explicit”.

“We follow Jesus – the apostolic tradition – the teachings of the New Testament. There are many ways in which mercy can be shown to people and they can be helped and supported but the actual apostolic teachings of Christ you can’t subvert them or get away from them,” he commented.

The Australian prelate said the Pope and bishops are servants and guardians of the apostolic traditions and so while they could “try to explain” those teachings better and “try to implement that more compassionately and effectively”, they had no warrant to change it. 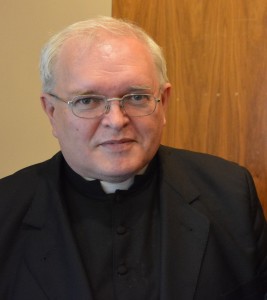 Mgr James O’Brien of St Colman’s Society for Liturgy and organiser of the Fota conference in Cork.

Speaking to CatholicIreland.net about Pope Francis, he explained that they converse in Italian.

Asked if he was a fan of the Argentinean pontiff, the Cardinal replied, “I see him regularly; he is a very good listener. Sometimes people when they are listening to you, it is immediately clear whether they approve or disapprove but he is not like that.”

“I’m not saying that my theological point of view would line up exactly, we might have slightly different approaches to some social justice issues but no I am a loyal and enthusiastic servant of the Holy Father.”

He added, “His support is indispensable in our work,” about Pell’s role in ‘fixing’ the Vatican’s finances.

The Cardinal suggested that Pope Francis’ experiences of Argentina’s political struggles had been “a good preparation for the milder forms of struggle in the Vatican”.

In his paper, ‘The Vine and the Altar: Learning from the Teaching of St John Paul II on the Priestly role of the Catholic Laity’, Cardinal Pell spoke about the importance of recovering the mission of the laity.

He drew on St John Paul II’s 1988 document, Christifideles Laici, as he suggested that the culture wars “are entering a new phase of political struggle which can only be fought by lay people”.

The struggle will be over the preservation of religious freedoms such as the right to teach Christian doctrine publicly in parishes and schools, especially in those institutions that receive state funding, he suggested.

The Fota conference was chaired by Cardinal Raymond Leo Burke and moderated by Professor Rodney Lokaj.

Professor Manfred Hauke opened the sixth session of this year’s conference with a paper entitled The ‘Sensus Fidei’ of the Laity according to John Henry Newman and Contemporary Theology, noting that during the preparation of the Extraordinary Bishops’ Synod on the family, some voices referred to the majority opinions of the faithful in certain countries as having the ability to ‘develop’ or to change the doctrine of the Church.

But he posed the question: do such statements express the ‘sense of the faith’ (sensus fidei) referred to by the Second Vatican Council?

The conference looked at the essay by Blessed John Henry Newman ‘On Consulting the Faithful in Matters of Doctrine’, which was published in 1859.

The appeal to the sense of the faithful appeared in a specific historical context, encouraged by the preparation for the dogma of the Immaculate Conception, in which Pope Pius IX made reference to the testimony of the Christian people.

Newman describes the basic elements of the ‘sensus fidei.’ Using the example of the fourth century struggle against the Arian heresy, he observed that the majority of the bishops and many Episcopal synods failed to preserve the Faith, whereas the testimony of the Christian laity, guided by holy bishops, such as St Athanasius, remained faithful to its Baptismal vows.

Holiness is thus an indispensable component of this ‘proof of the fidelity of the laity.’ The laity echoes the clergy in matters of faith, ‘yet there is something in the pastorum et fidelium conspiratio, which is not in the pastors alone.’

The recent historical discussion of this matter shows the negative influence of heretical theologians in the Arian controversy. 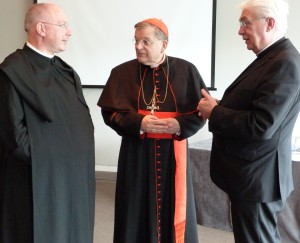 According to Newman, the laity, as the ‘measure of the Catholic spirit,’ can save or destroy the Church in an entire country.

In his ‘biglietto speech’ (1879), he prophesied a ‘great apostasy’ in Western culture, when religion is treated as being a question of sentiment and not of divine revelation. This apostasy certainly does not represent the ‘sense of the faith.’

Professor Hauke then assessed the approach of Newman as regards the contemporary discussion.

The recent document of the International Theological Commission on the ‘sensus fidei’ (2014) is examined in detail. The conclusion is that the ‘sense of the faith’ must be distinguished from public opinion. For discerning the authentic ‘sensus fidei’ there are certain criteria. The ‘sense of the faith’ is nurtured by the magisterium and clarified by faithful theology.

He concluded his submission referring to an address of Pope Benedict XVI on the eve of the beatification of Cardinal Newman in which he called him ‘the great champion of the prophetic office of the Christian laity.’

The final paper of the Conference was delivered by Fr Jao-Paolo Mendanca Dantas, entitled ‘The New Movements in the Service of the Unity of the Church. Reflections on the Charismas of Laity in the Light of the Thought of Joseph Ratzinger’.

It noted that during Vespers of the Solemnity of Pentecost 2006, in the context of a festive meeting with the New Movements in St Peter’s Square, Pope Benedict XVI addressed a homily to all present that summarised the mission of the Holy Spirit in the Church and in the world through presentation of three of His gifts: life, freedom and unity.

Before concluding his homily, the Pope exhorted the members of all Movements: “Dear friends, I ask you to collaborate even more, very much more, in the Pope’s universal apostolic ministry, opening doors to Christ”.

In this homily, the Pope seems to suggest that there is a theological relationship between the ministry of the Successor of Peter and the apostolic activity of the New Movements.

This papal statement, Fr Dantas pointed out, echoes a theological idea expressed in a masterly way by Cardinal Joseph Ratzinger, in a paper entitled ‘The ecclesial Movements: A Theological Reflection on Their Place in the Church’, delivered during the opening of the World Congress of Ecclesial Movements organised in Rome in 1998 by the Pontifical Council for the Laity. 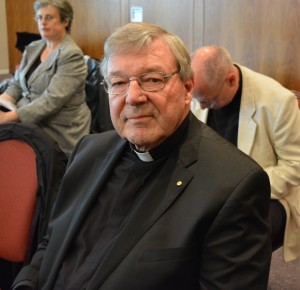 Fr Dantas sought to present and, analyse Cardinal Ratzinger’s paper from which emerges a beautiful and interesting reflection on the relationship between the New Ecclesial Movements and the ministry of the Successor of Peter, a relationship that, according to the German author, expands, in a sense, the traditional notion of Apostolic Succession.

In its annual report, St Colman’s Society for Catholic Liturgy announced that the proceedings of the sixth Fota International Liturgy Conference (held in 2013), edited by Fr John M. Cunningham, OP, Professor of Christology at the Angelicum University (Rome) and Prior of San Clemente, were about to be sent to the printers.

It was expected that the volume, Sacrosanctum Concilium 1963-2013: Liturgy and the Second Vatican Council, would be released early in September 2015.

It is planned that the editing process of this year’s proceedings will be completed by the end of January 2016 and the resulting volume released at Easter 2016.

The Society announced that the acta of Fota I, ‘Benedict XVI and the Sacred Liturgy’, had been translated into German by Emilia and Dr Peter H. Gorg.

The translation was edited by Professor Manfred Hauke and published by Pustet in Regensburg. The German edition of the book carries a foreword by Cardinal Kurt Koch and a review by Cardinal Raymond Leo Burke. Copies may be obtained directly from Pustet or through St Colman’s Society for Catholic Liturgy.

The Society also announced that it had launched a pamphlet series to promote liturgical and theological subjects among a wider general audience. The object of the initiative was to make good material easily accessible both in terms of readership pitch and cost.

The first volume in the series, ‘It is Right and Just! The Responses of the Roman Missal’, written by Fr John Cunningham, OP, was released on 1 July 2015.

It is essentially a commentary on the responses of the new English translation of the Missale Romanum drawing extensively on the wealth of available patristic sources but to which reference is not always made in liturgical publications.

Copies can be obtained through the publishers at [email protected]

The Society concluded its annual report by thanking its generous benefactors who underwrite the expenses of the Fota International Liturgy Conference especially Dr Carl Anderson and the Knights of Columbus, New Haven, Connecticut; Fr Stephan Horn and the Ratzinger/Benedikt XVI Stiftung, Munich, several members of the clergy and laity in the diocese of Cloyne as well as private benefactors in Ireland, the United States and Germany.