Cathedral of Christ the King marks 75th anniversary with day of jubilations. 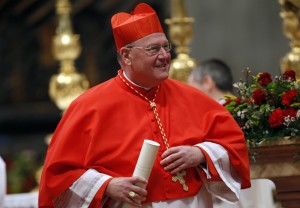 The celebrations begin at 10:15am when Cardinal Dolan plants a tree in the Cathedral grounds surrounded by couples celebrating their 50th and 25th wedding anniversaries.

At 11am, the Cardinal will concelebrate Mass with Bishop Michael Smith and priests of the diocese of Meath and the New Yorker will also deliver the homily.

The day will conclude with a blessing of thanksgiving by the Papal Nuncio, Archbishop Charles Brown, who hails from New York, Cardinal Dolan’s diocese.

According to staff at Mullingar Cathedral, “The idea of the street party is to create a community gathering of families, friends and parishioners. It has been many years since we’ve had a street party like this and we hope that lots of people will enter into the spirit of the day.”

Cardinal Dolan is a former president of the US bishops’ conference (2010-2013). At just 64 he is considered papabile and an important voice in Catholic life, both in the US and globally.

In a recent interview with John Allen of Crux, Cardinal Dolan suggested that Islamic leaders should be challenged to speak out in condemnation of terrorists such as Islamic State.

The Cardinal told Crux he hoped Pope Francis would challenge Islamic leaders to “speak up in an effective way,” condemning violence, as Catholic bishops condemned the violence of terrorists in Northern Ireland.

He also voiced his hope that the Vatican will be faster in responding to requests from diocesan bishops for action on the cases of priests guilty of sexual abuse, and that bishops themselves will be held accountability for their handling of the problem.

The Cardinal is a member of the Vatican’s Congregation for Catholic Education.

In 2011 he led a review of the Pontifical Irish College in Rome as part of Pope Benedict’s Visitation to the Irish Church.

The report on the seminary highlighted the concerns of seminarians around a certain anti-ecclesial bias in theological formation, though this was rejected by the four Irish trustee archbishops in a letter which accused the report of being hostile.

Cardinal Dolan has been a member of the Congregation for the Oriental Churches.