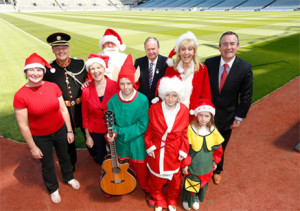 Miriam O’Callaghan, Sr Stanislaus Kennedy, and others at the launch of Stars, Choirs & Carols @ Croke Park

Due to popular demand, the deadline to register a choir or group for Stars, Choirs & Carols @CrokePark has been extended to Friday, 22 November 2013.

The Celtic Tenors, soprano Celine Byrne, the Dublin Gospel Choir, RTÉ’s Cór na nÓg, Tallaght Choral Society, the Army Number 1 band, as well as the famed Louis Walsh, will be lending a hand to the proceedings on the night.

Miriam O’Callaghan will lead the team onto the pitch at Croke Park.

With more than 500 adult and school choirs, the aim is to break a Guinness World Record and become the world’s largest group of Christmas carol singers – while also raising funds.

Cliona’s Foundation, which provides aid for families with critically ill children in Ireland, and The Sanctuary, which brings stillness and harmony into peoples’ lives, are the two charities to benefit from the event.

Speaking about the initiative, Sr Stanislaus Kennedy, founder of the Sanctuary, said “Christmas is a time of peace and goodwill and we are delighted that the Sanctuary is associated with this great festival.”

The Sanctuary is located on part of the former convent grounds of the congregation of the Religious Sisters of Charity. 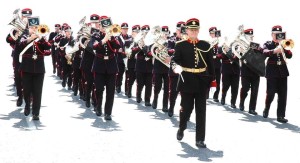 Sr Stan founded it in 1998 to provide a reflective and meditative place of beauty for people living in a frantic and busy world, as a space where they can recharge in body, mind and spirit.

As patron of Cliona’s Foundation, RTÉ broadcaster, Miriam O’Callaghan, commented, “Stars, Choirs and Carols promises to be an unforgettable festive evening of carols and fun while at the same time helping to support the work of two unique charities – all performing Christmas favourites, old and new.”

She added, “Cliona’s Foundation gives a financial lifeline to families with a critically ill child and the Sanctuary brings peace, calm and hope to the lives of thousands of people including the most vulnerable young people in our society.”

Stars, Choirs & Carols is the brainchild of Richard Mulcahy who was on RTE’s Secret Millionaire in 2012. He spent ten days in Limerick undercover with various charities. He was so inspired by Cliona’s Foundation he decided continue to help raise funds for the charity.

School, parish, diocesan, and community choirs have already signed up for the event and some of those who will participate are the Meath Diocesan Choir; the ladies from Edmund Rice Choral & Musical Society Waterford; St Mary’s Parish Choir Maynooth; Holy Child School Killiney, Co Dublin; Belvedere College Choir, Dublin; and Scoil Mhuire GNS Lucan Dublin. But there is still time to sign up.