Home > Featured > ‘Business’ was brisk at Mercy on the Mall

‘Business’ was brisk at Mercy on the Mall 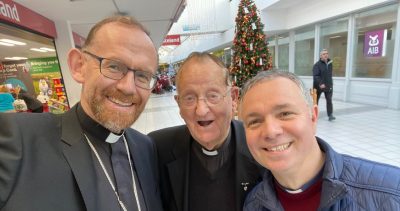 Bishop Fintan Monahan along with 19 priests from across the Diocese of Killaloe took part in the popular ‘Mercy on the Mall’ on Friday afternoon at Skycourt Shopping Centre in Shannon offering confession, a chat, a blessing, or a prayer.

“Business was very brisk,” according to parish priest of St Senan’s in Shannon, Fr Arnold Rosney, who explained that the shopping centre-based confessionals and prayers are done in a discreet and non-intrusive way.

The initiative is now in its fifth year. It has been held every December since Pope Francis announced the Year of Mercy in 2015, with a view to connecting to the wider community to their faith ahead of the busy Christmas period.

Fr Rosney, one of the co-founders of the initiative, told RTE Radio 1, “We decided to go out and bring the Sacrament of Reconciliation to the community. Rather than have them come to the church or to a sacred building or a scared place, we would go to a place that they were at – and there is no better place than a shopping centre just before Christmas.”

“So we decided in 2015 on 8th December to set up four locations around the centre with four priests for every hour for five hours in total and we would make ourselves available for confessions, or for a chat or a blessing and we would give something to the people as they would leave, maybe a prayer card or a parish calendar – something religious to take away with them.”

The initiative allows Christmas shoppers to take time out from shopping to reflect and pray.

“It takes off from a very informal situation,” he said and added, “It is an attempt on our part to go out to where people are at and offer the sacraments or offer a message of mercy. It is our way of saying we are there as a presence. You can avail of the sacrament if you so choose. And we’ve got great response, great feedback.”

He said that in five years he hadn’t heard back one negative comment about it.

Fr Rosney suggested that the initiative should be rolled out across the country to help the Catholic Church re-connect with people.

“This was certainly a risk when we first set it up, but it’s definitely paid off. It immediately captured the imagination of the shoppers here and the local population, and it’s something that the priests very much like to be involved in,” the Shannon-based priest said.

“When we set it up, it was in response to the call from Pope Francis to us to go to the marketplace, and that was what we did – bring the church out to the people.”