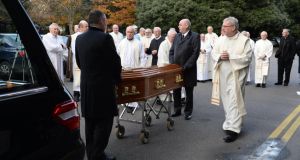 The funeral Mass for Fr Alec Reid will take place in Clonard Monastery in West Belfast today after which the Redemptorist will be laid to rest in Milltown Cemetery.

On Tuesday evening, a special ecumenical service of gratitude for the life of Fr Reid was held in Clonard and attended by hundreds of people from both sides of the community.

The service was led by Redemptorist, Fr Gerry Reynolds, who was a friend of Fr Reid’s and has been deeply involved in cross-community dialogue and building faith bridges for decades.

The service on Tuesday evening was attended by Methodist minister, the Rev Harold Goode, who verified IRA decommissioning in 2005 with Fr Reid.

Presbyterian ministers Rev Ken Newell and Rev Ruth Patterson also attended as well as representatives from the Church of Ireland.

Fr Kelleher told CatholicIreland.net that the Redemptorist community was honoured with the presence of the President and Mrs Higgins. “We were delighted to see so may people from so many different walks of life join with us and with Fr Alec’s family and friends in fond remembrance of him.”

He added, “We will miss our Redemptorist colleague and friend. We will miss his courage, his vision and his remarkable modesty. And we will be proud of him always. Ar dheis De go raibh a anam dilis.”

In his homily, Fr Kelleher recalled that Fr Alec from an early age, played hurling and while a student at the Christian Brothers in Nenagh, captained the team.

He also played for Éire Óg hurling club in Nenagh. In 1949 Tipp won the All Ireland Minor hurling championship, beating Kilkenny 6-5 to 2-4; Alec was a panel member.

“Fr Reid said later: ‘Hurling taught you how to win and how to lose. You learned failure and how to handle it. You learned how to deal with people, how to work with people, your team-mates; and how to respect the opposite side. Much later in life, if things were going badly with any of the negotiations between the various parties in the North, I would say ‘Well, we will have to put the Holy Spirit in goal’ and if things were going well, the Holy Spirit was a centre forward.’”

“In 1949, Alec joined the Congregation of the Most Holy Redeemer, the Redemptorists, in Cluain Mhuire, Galway and spent three years at University College, Galway. He took his first vows as a Redemptorist in 1950 and ordained in September 1957 by the Bishop of Galway, Dr. Michael Browne.”

“From the start of the Troubles in the north of Ireland, Fr. Alec was part of the Clonard Community, which sits on the peace – line. Clonard Monastery had always been a place of refuge for people, especially for suffering people. Fr. Alec was always in demand by the people of Clonard and the wider west Belfast area. He worked for many years with groups of Travellers with his great friend Anne Fitzmaurice.”

“Day and night people were looking for him – as individuals and as families. So much so, that there were times when people had to be told he simply wasn’t available. The community had to “protect” him – as much for his own sake as for anything else. His availability took a terrible toll on him: so often he missed meals; he was often out half the night. He was more than anything else a man “for” and “with” people in their pain and in their need. This extraordinary availability to people in their day-to-day need and suffering is what characterised him.”

“Fr Alec’s ministry of Christian reconciliation in the north of Ireland also involved his co-working with other men and women, clergy and lay people, from different Christian traditions, filled with the gifts of the Holy Spirit who had the time, the skills, the experience and, especially, the stamina for such a demanding mission.”

“Fr Alec had a deep conviction about the need for women to be equal partners in any human process, especially processes of conflict resolution. This conviction, which he often stressed, was felt very deeply by him, and was most likely arrived at through the deep friendship, courage and wisdom he was gifted with by the women in his life – some of whom are here! He often said to me that the Northern conflict could have been resolved much more quickly if there were more women involved!”

“God Bless. God bless you. If Fr Alec were here this morning that’s what he’d be saying to people. Fr Alec was a man of God. It is impossible to really understand Fr Alec’s life and work without taking God and Fr Alec’s faith in God into account. Fr Alec saw himself as a servant of Christ in a situation of conflict.”

“For Fr Alec, the primary role of the servant of Christ in a situation of conflict is to be the pastoral agent of the Holy Spirit in the midst of the conflict.”

Today’s Funeral Mass can be watched live via webcam at 12 noon from Clonard Church at https://www.catholicireland.net/ or www.churchservices.tv

RTE is planning to transmit a repeat of the Would You Believe documentary on Fr Alec Reid on Tuesday 17 December at 23:35.