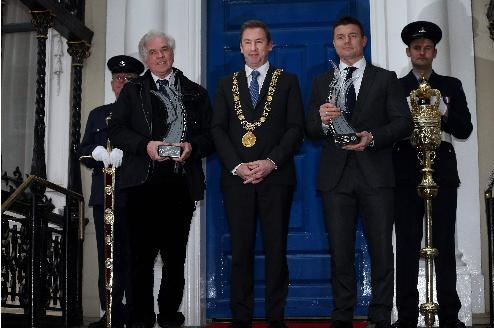 Jesuit social justice campaigner, Fr Peter McVerry, along with rugby star, Brian O’Driscoll were awarded the Freedom of the City of Dublin on Saturday afternoon.

The ceremony took place in the Round Room of the Mansion House and was overseen by the Lord Mayor, Oisin Quinn, who described the honour as one of the biggest the city can bestow upon its citizens.

“Though from different generations, they share much in common and are both inspirational leaders,” he said of the 70-year-old priest and 35-year-old sportsman.

Speaking ahead of the ceremony, O’Driscoll, who played his last match for Ireland last weekend and helped the national team secure the Six Nations Cup, paid tribute to priest who has worked almost all his life on behalf of the homeless.

“What Peter does is life or death,” the rugby star said. “He changes people’s lives”.

“He has achieved everything that you can achieve in his particular world of rugby,” the Co Down-born priest said.

“He is a role model for young people and has brought a huge amount of joy and pride to many people because of his achievements.”

Peter McVerry began his ministry in inner city Dublin in 1974 where he came into contact with young people who were sleeping on the streets.

He opened a hostel for homeless boys, aged 12-16, in 1979. The McVerry Trust now caters for homeless of all ages.