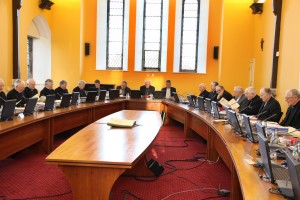 Those eligible to vote in this week’s European Parliament and local council elections are being encouraged to exercise their “democratic franchise” by the bishops.

In a statement issued on Sunday, the Irish Bishops’ Conference made a special plea to first time voters to ensure that their voices are heard in the important policy decisions before the European Union.

“As citizens of the European Union we have a role to play in shaping its future,” they said and added that a crucial starting point is exercising the democratic right to choose our MEPs.

In electing a new European Parliament, voters will influence the course of events as they happen inside and outside Europe over the life of the next parliament, they stated.

The bishops said the goal of European integration has not yet been fully realised and there is more work to be done to realise social cohesion and a strong identification of citizens with the institutions that represent them at European level.

“These elections offer an important opportunity to address these challenges,” the Irish hierarchy stated.

“The European Union model of governance, founded on the recognition of the inter-dependence of all peoples, encourages members to leave behind self-centred nationalism and pool our sovereignty in the interests of the common good.”

Referring to Pope Francis’ observation in his Apostolic Exhortation Evangelii Gaudium (The Joy of the Gospel) of society’s need to move away from an individualistic, indifferent and self-centred mentality, the IBC said an effective EU offers the structures to support such an approach at the level of governance.

“Indeed, the Christian vision of the dignity of the human person is one in which the European Union finds its values reflected and supported,” the bishops said.

Describing political leadership as a vital service to society, the bishops said Christians are called to articulate the fundamental values of human life which can then find expression in political activity.

“It follows then that we all have a responsibility to support our elected representatives by actively engaging in the political life of our society.”

They said voters need to look at the impact of European policy on the pressing issues of youth employment and unemployment, social protection, income and working conditions, all of which have a major impact on family life.

“European Union social and economic policy needs to ensure that growth is balanced with environmental sustainability to ensure fair distribution of the earth’s resources.”

The hierarchy said the plight of those migrants who have lost their lives in recent months while attempting perilous journeys to Europe by sea “is a stark reminder of the extremes of inequality we continue to tolerate in our world.”

“The timing of these elections – bringing together the local and the European – reminds us that the difficulties we face in Ireland are being experienced in other European nations.”

They said the next legislature will have a particular mandate to address these issues with policies that foster solidarity within Europe and beyond.

“The scheduling of these elections side by side also reminds us that the European project will only be as strong as the democratic culture of the different national communities contained within it.”

They added, “In an increasingly globalised world, we need this European project to work. If it is to serve our needs, we need to be ready to play our part.”

The European Parliament and local council elections take place this week in Northern Ireland on 22 May and in the Republic on 23 May.