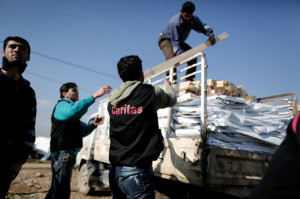 The UN said last Monday that the move was due to a funding shortage as the organisation was unable to secure the €51 million it needed to continue the scheme.

The programme had been operating a food voucher scheme for Syrian refugees in Jordan, Lebanon, Turkey, Iraq and Egypt.

After finding itself unable to secure the $64m it needs to support Syrian refugees in December, the WFP announced on Monday that it was halting the scheme.

Funding shortfalls had already caused the UN body to reduce rations within Syria, where as many as 4.25 million people need its help.

Since the war began in March 2011, the WFP has used the voucher programme – which allows refugees to buy food in local shops – to inject about €634m into the economies of those countries hosting them.

The voucher scheme’s suspension comes nearly three months after the WFP first warned it was running out of money and weeks after it said it had reached a critical point in its efforts to help Syrian refugees because of an 89% funding shortfall.

More than 3.2 million people have fled Syria and another 7.6 million have been displaced inside the country since the uprising against President Bashar al-Assad began three years ago.

A number of bishops met Bishop Antoine Audo SJ, Chaldean Bishop of Aleppo, Syria, during his recent visit to Ireland and discussed the plight of Christians in the Middle East.

Bishop Audo was on a visit to Ireland as a guest of Trócaire, to share his reflections on the humanitarian crisis prevailing in his country and on his thoughts and vision for the future.

The Syrian humanitarian crisis has resulted in the displacement of nearly 10 million people.

One third of the population of neighbouring Lebanon currently consists of 1.2 million refugees from Syria – and Lebanon is half the size of Munster.

About 1.8 million Syrian refugees have escaped the conflict to live in temporary accommodation in Jordan and in other countries.

Bishop Audo expressed his deep gratitude to the people of Ireland for giving so generously to the nationwide Trócaire coordinated collection in Catholic churches in November 2013.

The enormous positive public response to this special collection raised in excess of €5.3 million and it has gone to support those affected by the crisis in Syria, the wider Middle East and by Typhoon Haiyan in the Philippines.

Bishop Audo explained that the support provided as a consequence of the collection manifests itself in different forms: providing shelter, food, education and medial supports to people on the ground.

The bishops asked for the prayerful support of the faithful for those who are suffering at this time in this divided society.