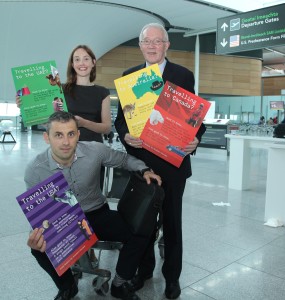 Ireland’s undocumented emigrants in the US have faced great personal turmoil and pain by being prevented from participating in key moments of family life back home due to their status, Bishop John Kirby said on Friday.

The Bishop said the undocumented were often precluded from attending occasions including baptisms, marriages and when a loved one is seriously ill or has died because of their lack of papers.

The chairman of the Irish Catholic Bishops’ Council for Emigrants said the bishops were “acutely aware of the human impact on families when relatives are unable to travel to Ireland to see their loved ones, and in particular to visit their ageing parents”.

Welcoming President Obama’s change in the deportation system, Bishop Kirby said in a statement that the US President’s Immigration Accountability Executive Actions serves to underline the “complexity of the problems surrounding migration.”

He said the undocumented’s family life in the US has often been curtailed by being placed under the daily stress of constant fear of arrest and deportation.

“The quality of life of the children of our undocumented living in the US has been particularly compromised in this regard,” he stated.

“The care for migrants/people on the move is given a particular significance by Pope Francis in his message for ‘World Day for Migrants and Refugees’ for 18 January next when he says, ‘It is necessary to respond to the globalisation of migration with the globalization of charity and cooperation, in such a way as to make the conditions of migrants more humane.’

“The staff offer pastoral care for the undocumented on a daily basis, and also advocate tirelessly on their behalf. At this time I wish to thank successive Irish governments for their support over many years on this issue and emigrant support more generally,” Bishop Kirby said.

The Irish Episcopal Council for Emigrants (IECE) was established in 1957 by the Irish Catholic Bishops’ Conference.

It seeks to respond to the needs of Irish emigrants prior to and following departure.  It is committed to addressing the needs of our most vulnerable emigrants, especially the Irish elderly community, the undocumented in the United States and Irish prisoners overseas.

Working in conjunction with the host Church the IECE seeks to respond to the needs of the Irish abroad as an emigrant community.

In May 2005 the Irish Bishops’ Council for Emigrants developed a strategic alliance with the United States Conference of Catholic Bishops.

The US Bishops had just established an initiative called “Justice for Immigrants: A Journey of Hope”, which aims to find a path towards legalisation for the many millions who were undocumented and among whom there are an estimated 50,000 Irish people.